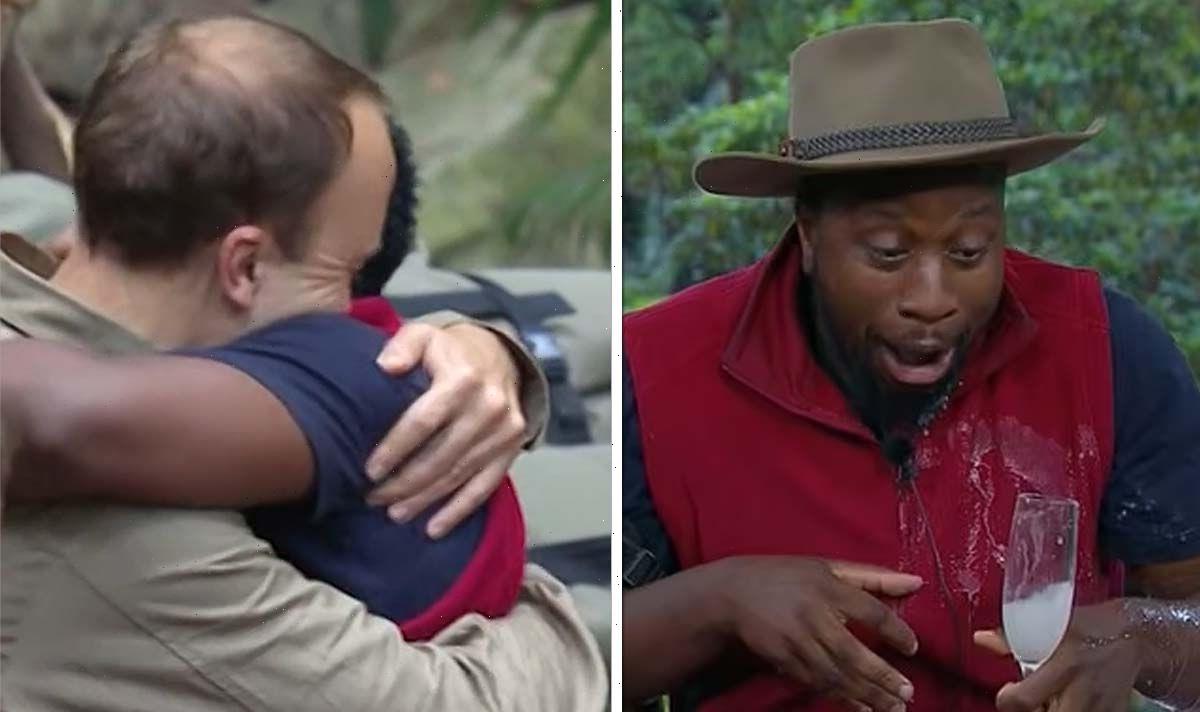 I'm A Celeb: Babatunde Aleshe is eliminated from the jungle

I’m A Celebrity…Get Me Out Of Here! star Babatunde Aleshe offered three words of advice for Matt Hancock before he left the jungle. The comedian was the fifth campmate to be voted out of the reality series. Before he made his final move he embraced the former health secretary and the pair shared some warm sentiments together.

Babatunde told the West Suffolk MP to “live it up” as he bid farewell to the reality show in Australia.

The comedian hugged his unlikely friend before his interview with Ant McPartlin and Dec Donnelly on ITV.

Whether he meant the advice to be for just in camp or beyond is unknown, but the sentiment capped off a series of entertaining interactions in the jungle together.

Babatunde was voted out by the public as he and his close friend Seann Walsh were the remaining two celebrities potentially leaving the camp.

The popular entertainer nicknamed Baba hugged everyone in camp, but it was his embrace with the MP which sparked the most interest.

During their moment together, Matt also whispered into Babatunde’s ear something that was not originally picked up in Wednesday’s show by Ant and Dec.

The MP whispered into the evicted campmate’s ear a message to be shared with his girlfriend Gina.

He sneakily told him: “Oh you are so wonderful”, in an attempt to look like he is praising the outgoing comedian.

Matt then followed that up and asked: “Will you say that to Gina?”

Campmates are not allowed to communicate with the outside world and he may be in trouble with more Bushtucker Trials looming for the six remaining famous faces.

Owen Warner, Seann Walsh, Mike Tindall, Matt Hancock, Jill Scott and Chris Moyles will battle out to be crowned King or Queen of the jungle.

Babatunde’s final act on the ITV show did not go down well with some viewers.

Alongside Radio X presenter Chris Moyles, they were accused of refusing trials by some fans.

During Wednesday’s instalment, the celebrities were faced with Critty Critty Fang Fang and were asked by Seann who would fancy the challenge.

However, the reaction from Baba did not go down well, as he admitted about doing the trial: “I really want to, but I won’t lie, I am not…” before ex-footballer Jill decided to go ahead, which did prove successful as she brought home all seven stars.

But, fans on social media vented their anger and @shaannn92 tweeted: “Neither Chris or Baba doing a trial again, let me act surprised #ImACeleb.”

Amelia Grace wrote: “Baba and Chris need to go next. Neither are putting any entertainment into the camp, no trials, nothing #ImACeleb.”

The favourite to win this year’s return to Australia is former Lioness Jill Scott.

She has emerged as the new contender among bookmakers and Coral tip her at 4-7 to cap off a mightily successful year for the European Championships winner.

Chris is now fancied as the most likely to be given the boot by the general public.

I’m A Celebrity… Get Me Out of Here! airs daily from 9pm on ITV.