Brandon Cronenberg, the son of filmmaker David, hasn’t deviated far from the tree in conjuring up ultra-explicit body-horror thrillers that hinge on psychedelic images of orifices, organs, and limbs being torn apart. His latest nightmare, the dystopian tourism horror movie “Infinity Pool,” continues that tradition to alienating lengths, homing in on the destructive capacity of the pursuit of sensual pleasure.

Stars Alexander Skarsgärd and Mia Goth deliver terrifically unhinged performances as a failing novelist and a mysterious tour guide, and Cronenberg has absolutely no shortage of original ideas, but the whole thing feels bloodless, cold and clammy as a speculum.

James (Skarsgärd) and Em Foster (Cleopatra Coleman) are on an all-inclusive vacation in the fictional state of Li Tolqa, where writer James hopes to take the defibrillators to his writer’s block. The pricey beach getaway is ensconced away from the rest of the state’s surroundings, and it’s here that the heedlessly rich can shut out the rest of the world. James and Em’s relationship seems largely passionless — the actors, in fact, seem oddly matched and lack much chemistry at all. Just the trick for injecting vim into a dreary vacation: groovy couple Gabi (Goth) and Al (Jalil Lespert). The vibes immediately ooze menace: on the dance floor, James and Gabi look at each other with insidious hunger, and later, Gabi ends up jerking James off on the beach, Cronenberg’s camera coming close up on his ejaculating penis because, well, this is a Brandon Cronenberg movie, and why not?

The moment isn’t as shocking as it wants to be, and it’s certainly not sexy. Despite the pile-up of blood, guts, holes, and dicks in a hallucinogenic montage that punctures “Infinity Pool’s” otherwise weirdly sleepy atmosphere, the film is never as appalling as it seems to confidently believe it is. Things heat up when Gabi decides to take James and Em on a joyride, where, careening in a top-down convertible through a wending cliff-flanked road, a hit-and-run accident with James at the wheel brings the debauchery to a screeching halt. Despite the obvious implications of looming manslaughter charges, for foreign travelers of James’ status and notoriety, there is a loophole: submit to a process of cloning yourself, watch your likeness be executed, and you’re free to leave. Unless, of course, you then don’t want to. 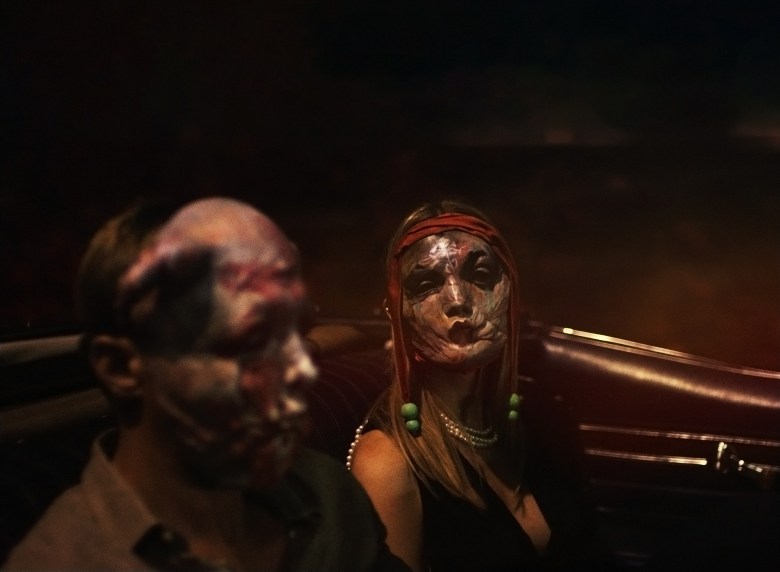 It’s a uniquely dystopic concept, and Cronenberg is mostly up to the task of fulfilling his ambition, of which he has plenty. The actual process of the double-making takes on a goopy, oozy “Under the Skin” form, as James submits to having his body and all its particulars scaled and archived before he’s plunged into a bath of burbling red sludge. This is actually the movie’s creepiest, canniest effect, because we don’t totally understand how these doppelgängers are made, and that keeps it more intriguing. There’s also the worrying prospect that your double may, in fact, be you, and that you are the recreated version of yourself. If that makes sense. And the thrill of watching yourself perish in grisly fashion is executed in ghoulish visual terms as, in one scene, Skarsgärd’s torso is stabbed repeatedly by a small boy with a sneering rictus grin of a face, Cronenberg again and again flashing to the rivers of blood pouring out of James’ stomach.

As is the lot of seemingly everyone who dips themselves into this depraved culture of watching yourself die for sport, James becomes addicted to the spectacle, wanting more, more, more as the ashes of his fellow selves are gifted to him in black urns he assembles in his suitcase. Oh, and there’s also the issue of Em wanting to get the hell out of Dodge, but James claims he’s lost his passport, urging her to go on without him. And because the excitability of witnessing your own death, like the movie, starts to run out of juice, the stakes are raised, and James, Gabi, and their gaggle of nihilistic pleasure-seeking cohorts embark on criminal enterprises involving robberies, assassination attempts, and the seemingly corrupt doctor heading up the cloning apparatus.

The director of “Possessor” and “Antiviral” unfortunately digs back too deep and too far into his shopworn bag of tricks in the second half of “Infinity Pool” which, for all its madness and twisted visual bravado, feels like a retread. There’s a psychedelic orgy montage suffused with all manner of body parts, James and Gabi high out of their skulls on some kind of “religious” drug and pounding each other in ecstasy, that feels very similar to the one in “Possessor” where Andrea Riseborough suddenly had a penis. This is likely one of the moments that originally got “Infinity Pool” its justifiable NC-17 rating. The sequence feels more like a music video dropped into the middle of Cronenberg’s already shaky narrative. But it’s maybe one of the only moments of true eye-gouging visual beauty, as cinematographer Karim Hussain insists on shooting the entire movie under a gray, washed-out sheen that is perhaps supposed to mirror the ugliness at the core of the characters’ souls, but the problem is none of them have one to begin with.

Neither does this film. There are sharp ideas here about humanity’s self-replicating and self-preserving drive toward longevity, the hollow rotten core at the center of the uber-rich, etc., etc., but it’s all blunted by unkempt execution.

Still, the actors make this movie, as time starts running out on James’ psycho-sensual odyssey and his attempts to escape the compound are met by the crazed antics of a white-wine-wielding, vitriol-spewing Mia Goth, in her most intensely deranged performance since her last most intensely deranged performance, and the one before that. Skarsgärd never dries out of a lustiness to debase himself, and a scene involving — I’ll all say here on this — him on all fours in a dog collar is a potent one. But Cronenberg can’t match up to his own actors’ fearlessness, and it turns out all along he’s merely been navel-gazing into his own Narcissus pool, cloning his own previous visions and killing them before trying to make something new.