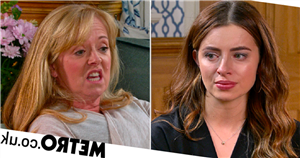 Jenny struggles to come to terms with the fact that the love of her life is dead, and thus she starts to knock back the wine at Johnny’s wake.

Jenny tells Daisy that she’s the sole beneficiary in Johnny’s will and he’s left her £20,000!

The above clip – taken from Wednesday’s first edition of the ITV soap – sees Jenny struggling to comprehend the reason why Johnny left her his money, and thus she resolves to give it to his children.

Daisy, however, reckons that she shouldn’t make any rash decisions, and should instead sleep on it.

But Jenny, drunk, lashes out at her, accusing her of trying to get her hands on Johnny’s cash.

Daisy, while hurt, lets the comment go, but Jenny’s not finished, as she brands her a ‘gold digger’.

‘Bertie’s not an accessory for your Insta photos!’, she says. ‘And as for Daniel, I’m going to tell him to keep the deeds to that house [of his] in his name only.

‘Oh come on! You don’t think you’re a gold digger?’

Daisy is hurt by Jenny’s accusation, and thus storms out.

Coronation Street airs these scenes on Wednesday November 17 at 7:30pm on ITV.