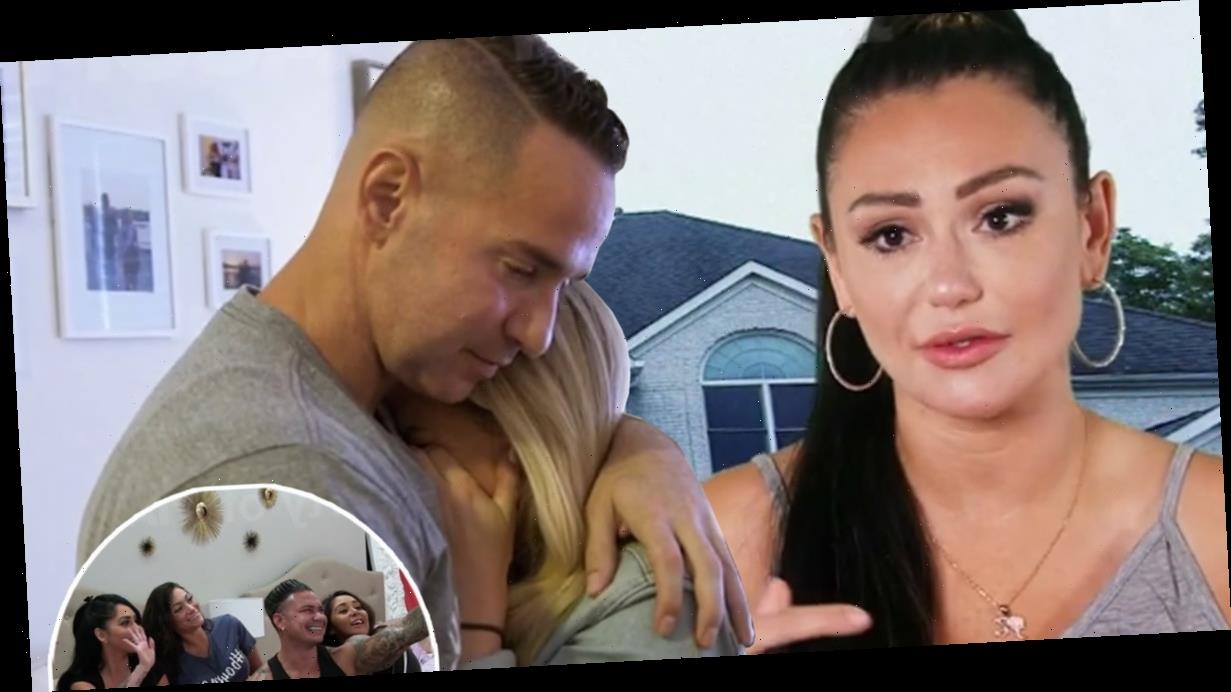 “I missed out on two meatballs being born, Jenni got divorced, Jenni has a new boyfriend, Ronnie went to rehab, Pauly’s traveling the world and Vinny is a stripper.”

We’ve got ourselves a Free Situation!

On Thursday’s new episode of "Jersey Shore: Family Vacation," imprisoned Mike "The Situation" Sorrentino was released back into the wild after serving eight months for tax evasion — and the gang assembled to celebrate his freedom.

Before he was set free, Nicole "Snooki" Polizzi, Jenni "JWoww" Farley, Deena Cortese, Angelina Pivarnick, Ronnie Ortiz-Magro, Pauly D and Vinny Guadagnino all met up at a rented house nearby.

While Jenni was also celebrating her divorce from Roger Mathews being finalized, it was far from civil between the two. Throughout her time with her costars, he was blowing up her phone with paragraphs of text messages.

"I get a text from my ex and it’s not good," she explained in a confessional. "I thought I worked everything out where he could take the kids this week when I’m with my roommates and I can have the weekend, but apparently now he wants to go back on the plan, now I’m f–ked, I gotta go home."

She tried to hash it out with him in the bathroom, where she also began crying. Explaining to the camera that she wanted to be there for Mike and figured the drama would be done now she and Roger were divorced, she said she was "torn" over what to do.

"The situation with Roger is so sticky," she explained. "Yes, we have a contract and we have to follow it, but I really thought if we’re great coparenting and working with each other we could switch off. Apparently, that’s just not the situation right now."

Snooki thought Roger was doing all of this "on purpose" just to mess with JWoww, telling him to "Grow up!" in her own confessional. While Jenni was still in the house at the end of the episode, it’s unclear how long she’ll stay there going forward.

In other news — while waiting for Sitch’s release — Vinny also had his first carb in forever following his stint as a Chippendales dancer. Deena was thrilled, saying, "A couple months ago, he was like a corpse, sunken in, no personality. He was like a bore. Now he’s eating a carb, he has some energy, he’s fun."

The gang also tried talking Angelina into getting a prenup, with her wedding looming. She, meanwhile, said all she wanted was a "regular nice wedding, something I can always remember." Well, at least half of that statement came true.

Cut to Lauren Sorrentino, who went to pick up her husband from the clink. He looked great as he got out, having lost 35 pounds behind bars. As he was released, even his producer and audio guy congratulated him on getting out.

"I’ve been dreaming about this day for 8 months and walking out of prison, I definitely feel like Rocky right now," he said in his first confessional, tearing up as he said he was "proud" of himself. "Seeing my wife right now for the first time as a free man, it’s the sweetest victory that I ever had."

After kissing on his wife, he re-entered the group text with his costars. "Turn up, we free," he sent them, along with a number of GIFs — including one of Mel Gibson shouting "Freedom!" from "Braveheart."

He then ordered a ton of food from the local pizza place, asking for 2 vodka pies, 1 plain pie, 1 sausage and broccoli rabe pie, 1 pepper, onion and mushroom pie, a large order of fried shrimp, a large order of chicken fingers, french fries and "3 diet sodars."

As he got home, he praised his wife for holding it down while he was in prison and sweetly said in a confessional that "she’s seen me at my worst and now she deserves me at my best."

"I missed out on two meatballs being born, Jenni got divorced, Jenni has a new boyfriend, Ronnie went to rehab, Pauly’s traveling the world and Vinny is a stripper," he exclaimed, saying he had a lot to catch up on.

Finally, he connected with his costars via FaceTime, vowing to see them all in person the next day. They were all shocked at his appearance, with Jenni adding, "I’m not saying go to jail … but holy f–k, he looks f–king great."

The episode ended with him vowing to get his pizza on and "make some babies" with his wife.

We Are Crying Over This Major Back to the Future Reunion

Jennifer Lopez Shows Off Every Angle in Sexy White Swimsuit

Inside the Real Housewives of New Jersey Reunion

Kendall Jenner Composes 'A Love Story' in This Barely-There Bikini

All the Stars Doing Their Civic Duty This Super Tuesday

Judge Judy Reveals The Fate of Her Show to Ellen

The Hadids Remind Us That Fashion Week Is Not Over Yet

All the Must-See Celebrity Sightings from Paris Fashion Week

Inside The Celebration of Life for Kobe & Gianna Bryant