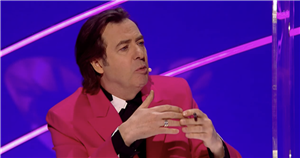 The chat show host and panelist was guessing who was behind the Scarecrow costume when he suggested there could be some royal connections.

One of Scarecrow's hints had been that they drove a 1960's sports car, as one could be seen in their VT – and they were American, as there were plenty of hints that they reside across the pond.

But Jonathan went a bit further with his guess, as he wondered: "Who drove away from her wedding in a vintage 60s sports car?

"Meghan Markle! She knows this is a favourite British show, how else would she get back in the country's favour?" he continued.

His quip got quite a few laughs from his fellow panelists, but they weren't so sure he was correct with his wild guess.

Others suggested Beetroot could be Shania Twain, Kelly Osbourne or even Miley Cyrus – as they suggested she could be twerking her way to victory.

It isn't the first time Jonathan has hit out at the Duchess of Sussex, as one Beetroot clue on Saturday was: "If her Majesty knew I had a [BLANK BLANK] at home, she would make a salad of me!"

And while the other judges looked suitably baffled, Jonathan couldn't help chuckling: "Could it be Meghan or Harry at home?"

The quip went down well with the studio audience, who all had a giggle at the joke.

Meghan and Harry have been thrust into the spotlight even more in recent weeks, as Prince Harry teamed up once more with Oprah Winfrey to produce their Apple TV show The Me You Can't See.

And Harry had plenty of revelations to make during the programme, as he admitted that the Royal Family told him to "play the game to make life easier".