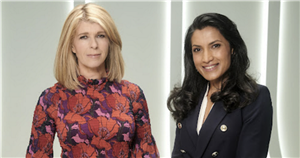 Kate Garraway has been announced as the presenter of new BBC health series Doctor, Can You See Me Now? with Dr Guddi Singh.

The six-part series for BBC Two uses the "latest augmented reality know-how and medical imaging technology to allow patients to see inside their own bodies", in order to "better understand their medical condition and the treatment choices available to them".

It comes after GMB presenter Kate, 54, won a National Television Award on Thursday for her documentary Finding Derek, which filmed every step of her husband Derek Draper's year-long battle with coronavirus following his hospitalisation with the respiratory illness in March 2020.

Talking about the upcoming series of Doctor, Can You See Me Now?, Kate said: "I am thrilled to be part of this fascinating new series that uses the most incredibly advanced technology to help us get a better understanding of how our bodies function when they require urgent medical attention.

"I believe we have all become increasingly curious about our health and well-being since the start of the pandemic, including me personally.

"I'm looking forward to delving deeper into the fascinating, emotional and empowering journey of all our patients and for them to see what is going on inside their own bodies."

While Dr Guddi Singh added: "As a medical doctor who is committed to making health care better, it’s been incredibly exciting to be part of this show and to see, first-hand, the possibilities opened up by augmented reality for clinical practice.

“We so often feel as though our doctors don’t get us, or that we only really understand a fraction of what we’re being told in the clinic.

"What if augmented reality helped bridge the gap? What if it allowed doctors and patients to connect and make more of their conversations in ways that simply weren’t possible before?

"At a time when health has never mattered more, I’m thrilled and privileged to be part of public service broadcasting that explores these questions with the British public."

The news comes after Kate spoke about the possibility of making another documentary after her impressive win at the National Television Awards on Thursday night for Finding Derek, saying the focus would be on her new life as "a 24 hour carer".

The Good Morning Britain presenter was almost lost for words when presenter Davina McCall revealed she was the winner in the brand new Authored Documentary category.

Going up against other powerful stories from Katie Price and her son Harvey, and footballer Marcus Rashford, Kate shook her head in disbelief as she accepted the gong.

While the star got emotional on the NTAs stage, which was sponsored by OK!, she was over the moon with the support from people who had voted, and after the reality of her win sunk in, she later revealed there were definitely “more stories to tell”.

Being interviewed behind-the-scenes of the star-studded event, the mum-of-two was asked if the success of Finding Derek would lead to another.

“Yes is the simple answer,” Kate replied. “There is a lot of challenges that we’re all facing now."

To read more about Kate Garraway, sign up for OK!'s daily newsletter here.