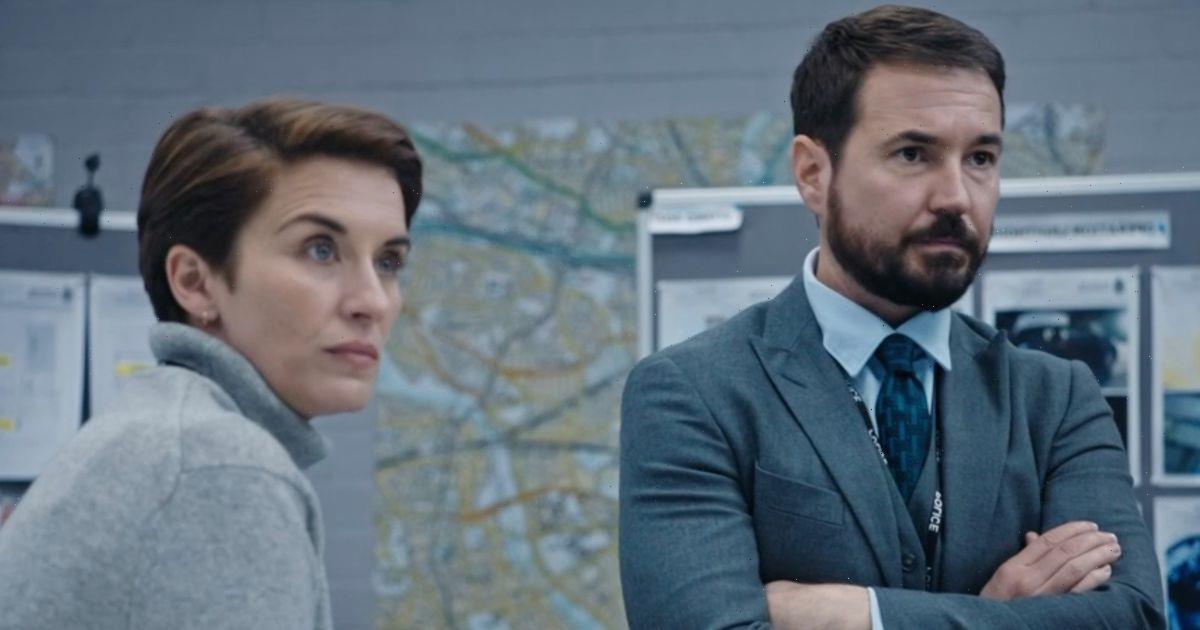 Line of Duty’s season six finale was a shocker – but not in the way many fans were expecting.

After the myriad of interviews, trailers and teasers from cast members, fans were convinced they were in for a rough ride and one of the core trio could even turn out to be the fourth man of H in the Organised Crime Group.

Others were convinced Ted Hastings (played by Adrian Dunbar), Kate Fleming (Vicky McClure) or Steve Arnott (Martin Compston) would end up dead by the credits.

Neither happened – and the last member of H turned out to be Ian Buckells (Nigel Boyle), a minor character who has come in and out of the show.

Despite the unexpected ending, there are still questions surrounding Jo Davidson (Kelly MacDonald), Steph Corbett and Chris Lomax that were left hanging.

Did writer Jed Mercurio intentionally leave these plot threads to be explored in season seven?

Will Ted Hastings go to prison?

The original head of AC-12, Superintendent Hastings could be in seriously deep water after he finally revealed the truth John Corbett was an undercover officer in season five.

Patricia Carmichael has seemed determined to expose and take down Hastings ever since she entered the series, and viewers grew to seriously hate the character.

But when Ted told her the truth about Corbett, her reaction was hard to read.

"What do you want me to do with that information?" she asked, as Ted all but shrugged and left the ball in her court.

Perhaps Carmichael will finally show her softer side and fans will warm to her after she decides to leave her colleague in the clear.

Just one more reason for viewers to cling to the hope showrunner Jed brings the show back for a seventh outing!

Chief Constable Osborne has appeared dodgy since way back in season one of the BBC show.

The character’s behaviour was even one of the main reasons why Steve left his department to investigate corruption in the police force.

Osborne has been a prime suspect in AC-12’s investigations ever since, but even in the season six finale he continued to insist the idea of institutional police corruption is an “outrageous lie”.

Given the fact he worked on the Lawrence Christopher murder case with Marcus Thurwell and Buckells, and continues to halt AC-12’s moves at every turn, it still remains incredibly likely Osborne is hiding his true allegiances, and could still be working for the OCG.

Is Ian Buckells actually the leader of the OCG?

Detective Superintendent Ian Buckells being the Fourth Man was not something any expected.

But despite the reveal supposedly rounding off the end of the lengthy and ongoing H storyline, some people were actually convinced there were more twists to come.

For one thing, fans were convinced Buckells isn't actually the leader of the OCG, as he didn't actually confirm it when asked.

Is the detective actually covering for a secret corrupt head instead and simply being the fall guy?

Perhaps Osborne convinced Buckells to take the heat forcing Ted, Steve and Kate to focus their efforts on entirely the wrong man.

If that's the case, with Kate gradually coming to the realisation she wanted to rejoin the anti-corruption department, executive producer Jed could have easily set up another season without fans realising.

Other possibilities could be that Tommy Hunter, who was killed in season two, left another few minions in play after his death.

The mystery of Jo Davidson

Jo Davidson actress Kelly MacDonald had an epic role in the latest series of the BBC’s hugely popular crime drama, but her character certainly left more mysteries than she came in with.

After the now-infamous interrogation which she peppered with "no-comments," the core trio was none the wiser as to why Jo had tried to blame her adopted father, Chief Superintendent Patrick Fairbank, for her actions when she accused him of being a bent copper.

Unable to defend himself, as he suffers from advanced dementia, Fairbank was then put on the back burner when it was revealed that the last H was actually Buckells.

But with the reveal that paedophile Tommy was her biological father as well as her uncle, it was eventually decided that Jo had been coerced into helping the OCG her entire life, and should be put into the Witness Protection programme instead of jail.

Was it all too easy? Should AC-12 really have allowed Jo to move on and leave her crimes behind?

As the show came to an end, the character was seen with a fresh haircut and a new girlfriend, strolling around the autumnal countryside months later.

But the eerie finish to Jo’s story, as she glanced back with a smile and free from all punishment, seemed to hint that the copper could actually have more secrets.

Was it all just one big ruse and how on earth did she manage to get off from decades of criminal activity scot-free?

Steph Corbett was a heartbroken widow struggling to move on from the death of her corrupt husband John in series six.

Even after it was revealed Ted had given Steph the dirty cash to help her take care of the kids and her finances, it wasn’t clear whether Steph had been carrying on her late husband’s work.

But while some had been convinced the character would be exposed as working with the OCG – especially given her growing connection to Steve up until episode five, the finale seemed to throw things off-kilter.

For one thing, Steph appeared in barely more than a mention in the final episode and her one moment was during the voicemail.

So perhaps she was innocent after all, unless Jed decides to bring her back for season seven.

One of the mysteries fans had been longing to find out was whether Chris Lomax was secretly a dodgy cop.

In episode five, the policeman’s bizarre actions at the warehouse site left fans convinced he was secretly in the OCG – particularly when he mentioned going to the pub in connection with Marcus Thurwell.

But while his integrity seemed to remain intact in the finale, a surprise to many, the discrepancies over signatures and Jo Davidson’s prison cell transfer sent off alarm bells.

Was he the one who secretly ordered her killing and had been ordered to get rid of her by fellow corrupt members of the underground dodgy cops?

With Kate and Steve rescuing Jo in time – and the fact that she is now in witness protection – it seems unlikely viewers will ever find out if he had any involvement.

While fans have had mixed reactions to the end of Line of Duty’s sixth season, the main question on everyone’s lips is simply whether they can look forward to its return.

At the moment, neither Jed nor the BBC have confirmed whether Sunday night’s episode really was the end, and it looks like they may have longer to wait.

Let the theories continue in the meantime.

Line of Duty season six is available to stream on BBC iPlayer now.