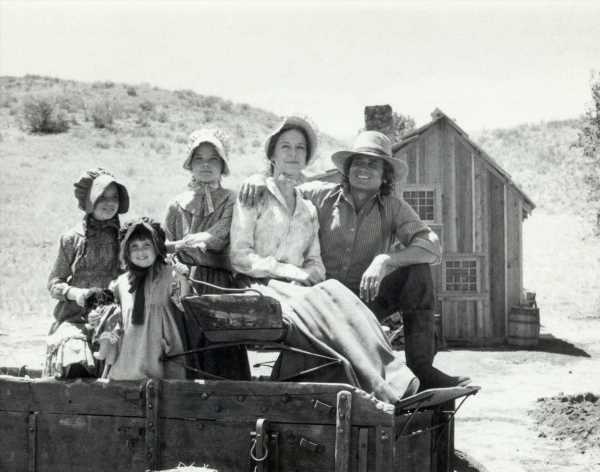 Michael Landon and Karen Grassle portrayed Charles and Caroline Ingalls in the NBC hit Little House on the Prairie. Though the family drama only had a few Christmas episodes during its nine-season run, Grassle recalled one scene during rehearsal that “undid me”.

Landon created Little House in 1974, with the pilot premiering in March of that year. Viewers tuned in to see Charles and Caroline move with their three daughters – Mary (Melissa Sue Anderson), Laura (Melissa Gilbert) and Carrie (played by twins Lindsay and Sidney Greenbush) – from Wisconsin to Kansas. Charles’ friend Isaiah Edwards (Victor French) helps them settle into their new home on the open prairie. Grassle recalled the day of the Christmas segment of the pilot and running into the Ingalls’ dinner entrée prior to filming.

“It was a bright, sunny day when we were to do the Christmas scene,” Grassle wrote in her memoir, Bright Lights, Prairie Dust. “As I walked from the set to the makeup trailer and back, I noticed a turkey tied to a stake on the grass.”

With the historical drama set in the 1800s, Grassle knew the turkey was going to become the centerpiece for the episode’s Christmas meal but didn’t let the situation distract her.

“I didn’t tarry to befriend the bird,” she explained. “I wasn’t sentimental about its fate, but I also didn’t want to bond with it before the scene.”

The segment also marked the beginning of Caroline’s appreciation for Isaiah. With his brash style and sometimes abrasive persona, the two were clearly polar opposites. Yet Isaiah’s generous gesture on Christmas endeared him to Caroline.

“A frozen Mr. Edwards, a large bearded man shrouded in ice, arrives,” Grassle wrote of the holiday scene. “He had forded a freezing stream and made his way to the family, bringing along potatoes for dinner and shiny tin cups for the girls. [Caroline’s] antipathy toward him melts, and from that day on she accepts him as a friend.”