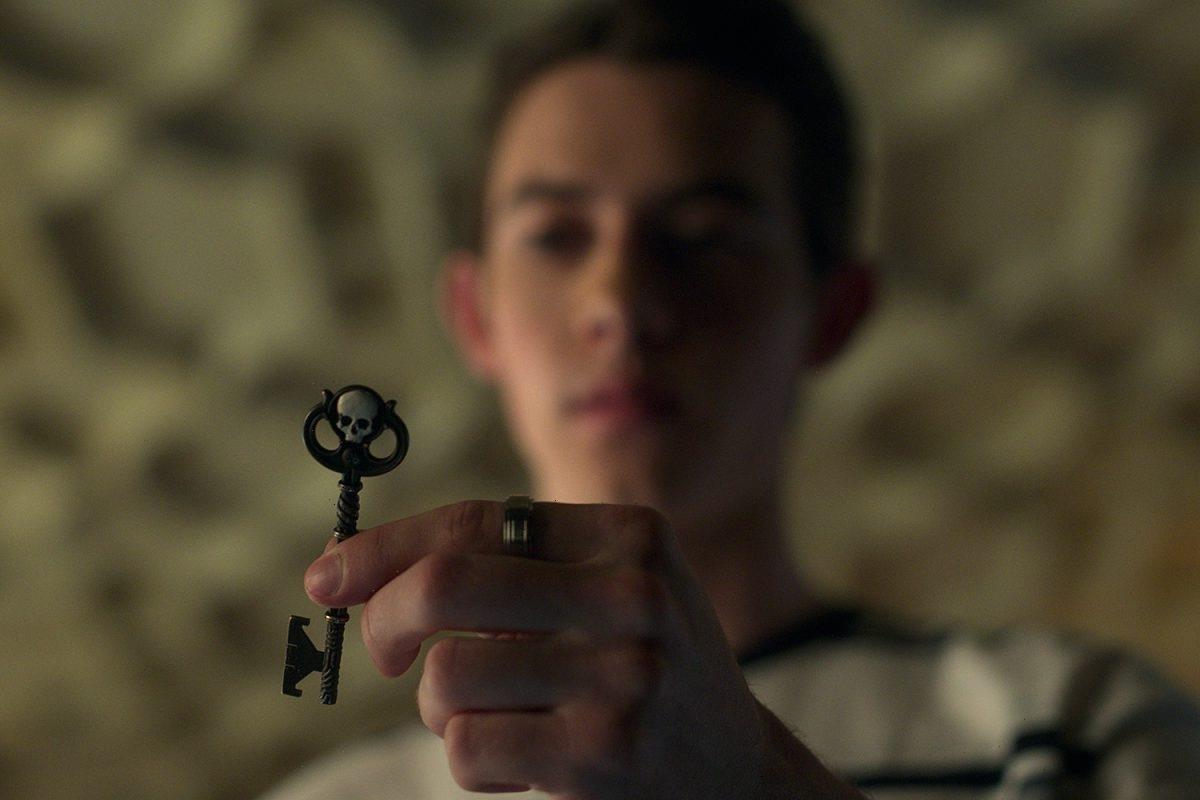 The Locke family’s magic is back in action in Locke & Key Season 2. Netflix‘s new batch of episodes follows Tyler, Kinsey, and Bode Locke a few months after allegedly defeating the Black Door’s demon, Dodge, for good. However, the kids don’t know that Kinsey’s friend, Gabe, is actually Dodge in disguise, still alive and plotting revenge with a possessed Eden Hawkins. Of course, Locke & Key Season 2 wouldn’t be complete without some new keys added to the Lockes’ collection. The season introduces seven new keys in total — here’s the full list.

Locke & Key viewers catch a look at the new Hercules Key in season 2 episode 1. The key unlocks a belt that gives its wearer super strength. Bode (Jackson Robert Scott) uses the Hercules Key to move a couch at Keyhouse, while Kinsey (Emilia Jones) uses it to bend a table leg at Matheson Academy. Later, Tyler (Connor Jessup) uses it to lift a bench outside the school.

The Hercules Key becomes one of the most helpful keys for the Lockes and their friends in season 2, as they use it to fend off Gabe (Griffin Gluck) and his demon minions in later episodes. Additionally, Bode uses it to move rocks in the caves when Josh Bennett (Brendan Hines) gets caught in a cave-in.

Bode discovers the Small World Key when he and his new friend, Jamie (Liyou Abere), discover the dollhouse replica of Keyhouse in Josh’s home. The kids think the dollhouse is a way to watch Keyhouse from afar, but when Bode breaks the tiny model of his bed, he returns home later to find his real bed broken, too. He and Jamie quickly realize that the Small World Key can manipulate the real Keyhouse and add giant objects to it.

The Small World Key has its ups and downs for the Lockes. Bode and Tyler discover its downside when a spider crawls into the dollhouse, thus bringing a giant spider to Keyhouse. The only way to eliminate the giant spider is for Jamie to kill the tiny spider, which makes for a disgusting mess in Keyhouse. On the bright side, though, Jamie and Bode later use the key to capture Eden (Hallea Jones) beneath a glass cup.

Back when they were teens, Rendell Locke (Bill Heck) forged the Memory Key with his brother, Duncan (Aaron Ashmore), in order to prevent themselves and their friends from forgetting magic as adults. However, when things went awry with Dodge (Laysla De Oliveira), Rendell hid the key.

In the present day, Erin Voss (Joy Tanner) helps the Locke kids locate the Memory Key to unlock Duncan’s memory of magic so he can help defeat Dodge. With the Memory Key in their possession, Tyler, Kinsey, Bode, and their friends can also remember magic as adults if they so choose. At the end of the season, it’s implied that Bode uses the key to help Nina Locke (Darby Stanchfield) understand magic.

Duncan and Bode find the Chain Key in Keyhouse. The key connects to a padlock, which captures someone in a long chain at the user’s command. Erin is the first one to use the Chain Key on Gabe, but he escapes and kills her. Later, Gabe uses it to capture Bode and entice Duncan to forge an evil key. Dodge also uses it in an attempt to choke Kinsey.

The ghost of Sam Lesser (Thomas Mitchell Barnet) leads Kinsey up the chimney in Keyhouse to find a mysterious vest, similar to the Hercules Key’s belt. Then, he takes her to an empty birdbox in the cemetery, where she finds the Angel Key. When the Angel Key holder wears the belt, they gain angel wings and the ability to fly.

This comes in handy for Kinsey in her final battle with Gabe/Dodge. She uses the key to grab the Crown of Shadows from Gabe and later flies away with Tyler as the demons’ lair crumbles off the cliff.

Gabe and Eden try to make the Demon Key throughout Locke & Key Season 2. However, only a Locke can forge a key, so their plan doesn’t work until Gabe kidnaps Duncan and Bode. Gabe uses the Demon Key to summon a demon into Javi, as well as Daniel Mutuku and Jackie (Genevieve Kang). Soon, Gabe builds a demon army, using them as his minions and sending them to threaten the Lockes.

Tyler forges the Alpha Key with Duncan’s help after Gabe uses the Demon Key on Jackie. He intends to use the key to remove the demon from Jackie’s body. It works, but a strange black substance pours from her eyes, and she chokes to death. Tyler later uses the Alpha Key to kill several of Gabe’s demons and then uses it on Dodge. The Alpha Key kills Gabe and removes Dodge from existence, leaving the Echo of Lucas Caravaggio (Felix Mallard) behind.