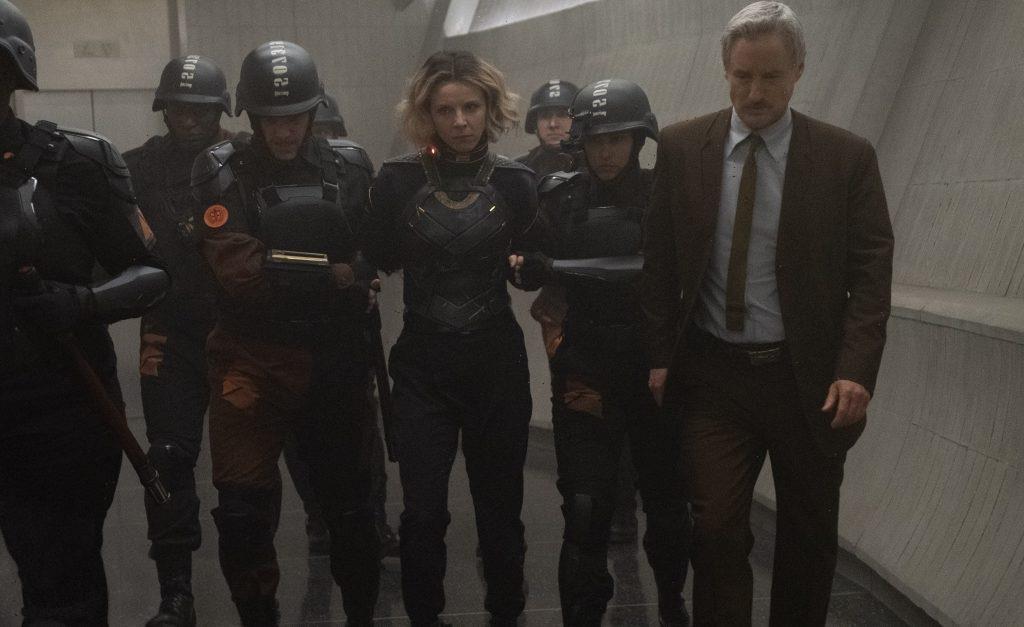 To date, Loki remains the quintessential Marvel/Disney+ series with the most riveting cliffhangers, and, man, were we ever peering over the edge.

There’s a ton to unpack here, so let’s start toward the end. Sooner than expected, Loki and Sylvie (Tom Hiddleston and Sophia Di Martino), prisoners of the TVA’s Ravonna (Gugu Mbatha-Raw) wound up before the lizard Timekeepers’ thrones, the apparent puppetmasters of this whole timeline cop authority, and policemen of those who veer from the timeline. A fight ensues with Loki and Sylvie squaring off between Ravonna and her troops. Sylvie succeeds in throwing a sword at one of the Timekeepers and cutting its head off. It rolls to her, and she learns that it is indeed a Wizard of Oz situation, in fact it’s worse: The Timekeepers are androids. WTF is going on? It’s in this climax that Ravonna “prunes” or zaps Loki with that cattle-prod weapon her TVA troops are carrying. He disappears. Sylvie has the upper hand at the end of the episode, and is left with Ravonna. In episode 5, we’ll see what Ravonna confesses as to what the hell is going on in the universe.

Loki isn’t the only one who got “pruned” today. Earlier in the episode, he finally convinced TVA agent Mobius (Owen Wilson) that everyone at the TVA is a variant, and had prior lives which were stolen from them when they were captured. Throughout the episode, Mobius refused to accept this truth as he returned Loki to interrogation; the Thor trickster and fellow femme loki Sylvie were saved by the TVA toward the onset of the episode, and whisked off the apocalyptic planet Lamentis via some time doors. Upon the duo’s return to the TVA, they were promptly shackled at the neck. In fact what finally convinces Mobius that Loki isn’t lying about the TVA is that he discovers on Ravonna’s TemPad, a video confession from Hunter C-20 (Sasha Lane) in which she says “I had a whole life on the sacred timeline…so is every single person in this place (a variant).” Ravonna steps into the video shot and says “I’m ending this.”

So what now? What happens when you’re “pruned”? Do you die forever? Thank, God, for that epilogue because we actually get to some light at the end of the tunnel. Loki awakes and says, “Is this Hell? Am I dead?”. He looks up to see three lokis: Classic Loki (Richard E. Grant), Kid Loki (Jack Veal), who holds a Komodo dragon; and Boastful Loki (DeObia Oparei).  “Not yet,” answers Classic Loki, “But you will be if you don’t come with us.” 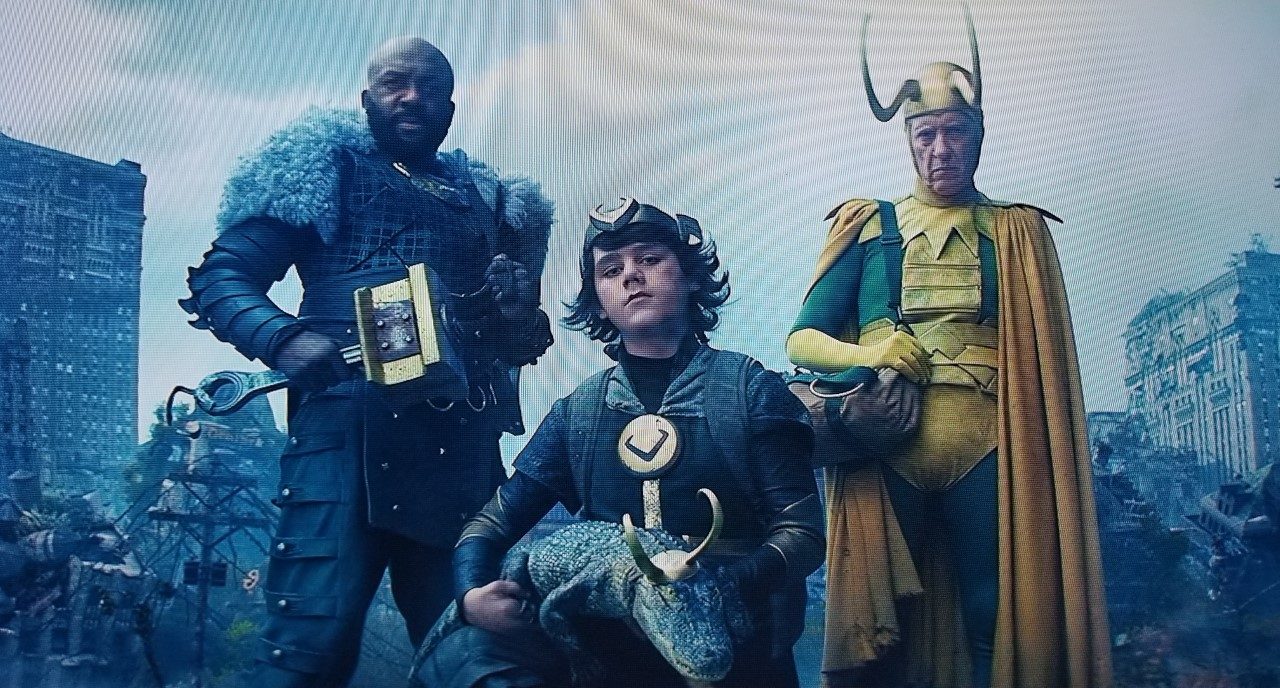 Loki wakes up in what looks to be a dystopian future NYC, wrecked by war, with the remnants of what appears to be The Avengers HQ in the background. All of this tees off as to where the final two episodes will go.

Will Loki, who clearly has a soft spot for Sylvie, reunite with her? Did Mobius make it to jet ski heaven? We’ll see. 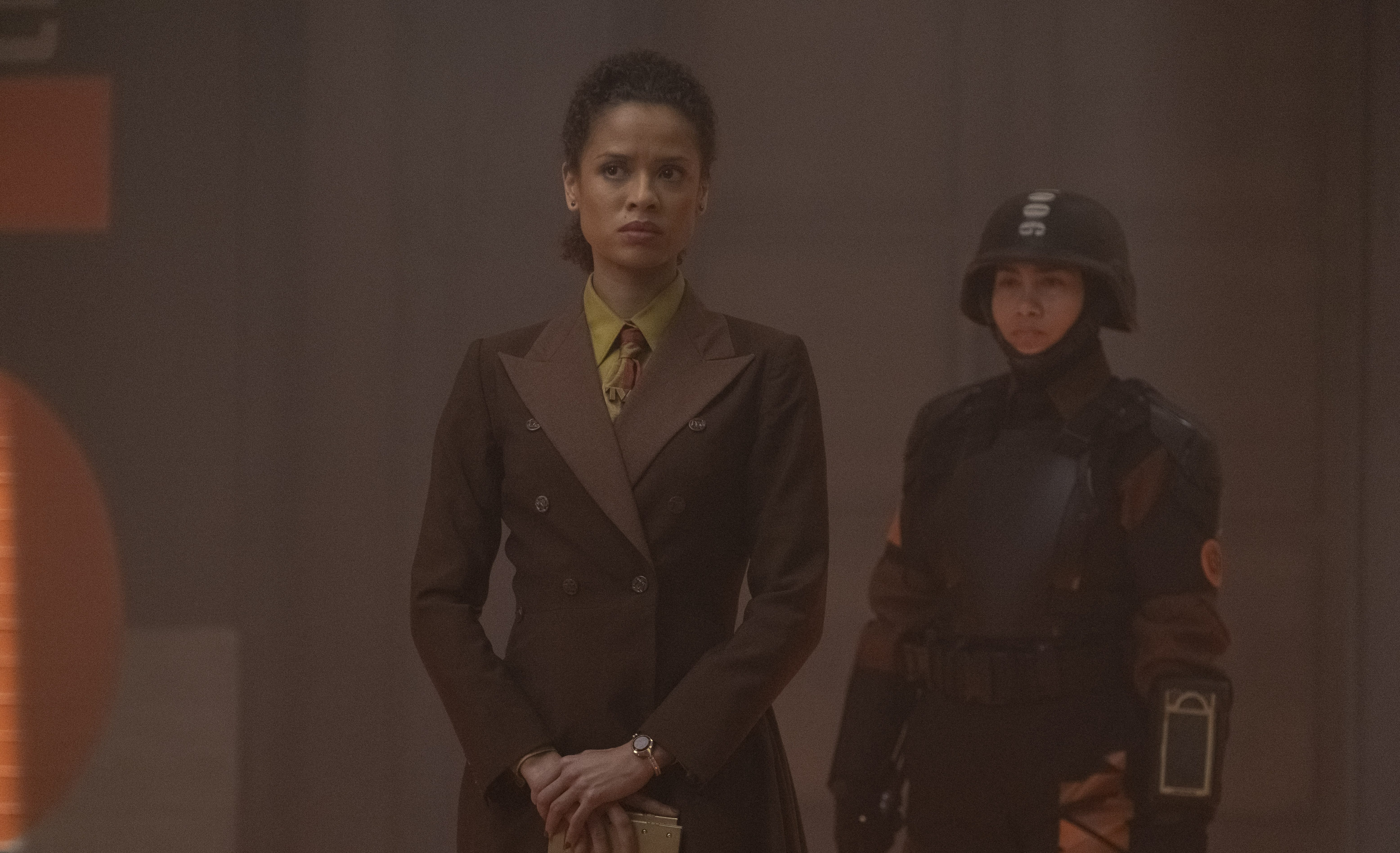 –Sylvie was abducted as a child by the TVA and Ravonna (when she was a Hunter C-troop). She tells Loki early on in the episode before they’re returned to the TVA, that she’s spent her life fleeing from them, figuring out how to hide and growing up at the ends of a thousand worlds.

–Before Loki and Sylvie’s showdown with the Timekeepers, Hunter B-15 (Wunmi Mosaku) has an epiphany, that her early memories are real, and this whole TVA org she’s been working for is sham. She takes Sylvie back to the Hurricane outside the Roxxcart store in Haven Hills, Alabama 2050, and where the femme loki has a mind meld with her. It’s here where B-15 realizes that she use to be somebody. Now B-15 is wanted person, and Ravonna puts out an alert for her, that she’s been comprised by the variant.

–There’s a lot of assumptions out there as to who the big villain is, from Kang the Conqueror (Jonathan Majors) to The Beyonder to even Mephisto. Knowing Marvel, don’t bet on anything. They don’t abide by any faithful comic adaptation, which is always part of the surprise.