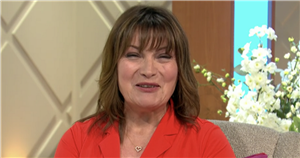 Lorraine Kelly was left giggling on Wednesday morning as she chatted to Dr Amir Khan on her ITV talk show.

The 61-year-old television presenter discussed pre-match nerves with the GP ahead of England's Euro semi-final match against Denmark this evening (July 7).

However, the Scottish star didn't expect to hear Dr Khan's cheeky response when talking about the big match.

He went on to add: "I obviously mean the semi-finals."

Lorraine bursted into laughter after hearing the doctor share the innuendo.

Viewers at home were left gobsmacked and rushed to their keyboards to share their views.

Taking to Twitter, one fan penned: "@lorraine ‘I feel a large semi coming on tonight…..’ alright then Dr Khan #lorraine."

Another added: "My other half defo looking forward to the game now after Dr Amir announced large semi tonight."

While a fourth social media user said: "I feel a large semi coming on. OMG."

There has been a lot of football talk on ITV Lorraine this week.

The TV personality welcomed Atomic Kitten onto her show on Tuesday to talk about their song Whole Again becoming a football anthem during Euro 2020.

Liz McClarnon and Natasha Hamilton told Lorraine that fans may expect to hear a new version of their hit single.

When talking about the revamped track, Liz said: "Just to hear them sing it in the stands was like amazing for us.

"Then we would wake up after any England game with like 120 notifications with like pictures and videos from bars and stuff.

Host Lorraine then asked Natasha, "Do you not think, Natasha, that you should bring out a version?"

"Will we bring out a Southgate version? Hmmm maybe…"

England take on Denmark at 8pm on July 7 with coverage starting on ITV at 6.30pm.

Lorraine airs weekdays on ITV at 9am