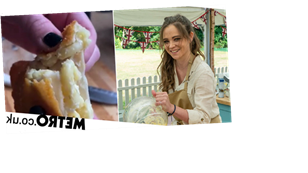 If you need some new food inspo for your next lockdown bake, then look no further as Great British Bake Off star Lottie Bedlow has just shared her recipe for crispy Mac’n’Cheese pancakes.

Mac’n’Cheese and pancakes? Count us in.

Fans will recognise Lottie from this year’s series of Bake Off – she was given the boot from the baker’s tent in week seven of the show, but just because she’s not out impressing Paul Hollywood and Prue Leith anymore doesn’t mean Lottie isn’t still providing us all with those delicious goods.

In fact, she took to Instagram with fellow Bake Off star from this year’s series Mark Lutton, who made it to week six of the show, to share their insane recipe for their pancake spin-off.

Think doughy pancake but with all that cheesy goodness too.

Fancy giving it a whirl? Well, here’s how…

For the pancakes (makes six):

Fans were all for Lottie and Mark’s tutorial and called for the two of them to get their own cooking show, with one fan posting: ‘There’s a TV show waiting to happen’ as others insisted they could watch the ‘duo’ all day.

It comes as viewers are set to see who will win this year’s series of the Great British Bake Off as finalists Laura, Peter and Dave go head-to-head in Tuesday night’s final.

MORE : I’m A Celebrity 2020: Vernon Kay screams F-word during live trial after being told not to swear