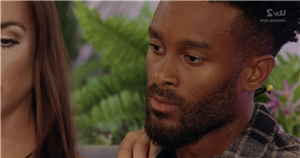 Love Island fans have been left shocked as Faye Winter decided to recouple with Sam Jackson, during a shocking episode.

Faye was previously coupled up with Teddy Soares, but after receiving a postcard which showed Teddy appearing to kiss another girl, she decided to recouple.

Teddy was then seen walking in on his own, and looked surprised to see Faye with another boy.

Taking to Twitter, fans were quick to rush to Teddy’s defence: “JUSTICE FOR TEDDY #LOVEISLAND,” one wrote.

Another said: “You’re better than Faye anyway Teddy,” while a third penned: “no i feel so bad for teddy….. faye’s acting like he’s the one that’s only done anything wrong when she’s the one who recoupled.”

As well as Love Island viewers, some of the boys also looked baffled as they watched the interchange between Teddy and Faye.

When asked how she feels about Teddy now, following Casa Amor, Faye added: “I don’t think I can say.”

“Once I received the postcard, the girl I’ve been working so hard on was closed off again,” Faye added.

She said: “To be honest I want to apologise to all the guys because we closed off to you completely. There was one guy I wanted to get to know before the postcard came but I chose not to.

“However, when the postcard came I thought that was time to get to know him. He’s been nothing but respectful and he wasn’t moving mad when there was only one girl single in the villa.

“He takes the p*ss out of me all day every day and he just makes me laugh, so for that I am going to recouple.”

As Teddy walked in alone, he looked shocked and Faye voiced that she’d seen him sharing a kiss with another girl.

Teddy was shown the postcard later on in the episode, and Teddy admitted he couldn't believe Faye had chosen another boy based on the postcard.

"I was on the day bed for the entire time. You saw this and you picked someone else," Teddy said, leaving Faye crying on his shoulder.