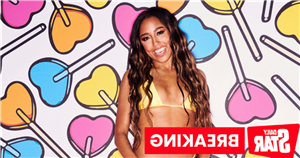 Love Island's Afia Tonkmor was left devastated as she became the first contestant to be dumped from the villa.

During the latest episode of the much-loved ITV dating show, the islanders were interrupted by an unexpected text which instructed them to gather around the fire pit immediately.

While at the fire pit, they soon discovered who would be forced to leave the villa that very evening.

Unfortunately, it was bombshell Afia's turn to pack her bags and say her final goodbyes to her housemates after the new bombshell Jacques O'Neill decided to couple up with Paige Turley.

Seeing the unexpected departure take place, viewers rushed to Twitter to share their thoughts on the surprise dumping.

One viewer said: "Kind of bitter sweet, Afia leaving. Kinda wanted to see how her leave out would play out."

Another penned: "Lmao Afia would have had a better chance in the villa if they brought a different guy instead of Jacques."

While a third chimed: "I really liked Afia she was so sweet."

The shocking news regarding Afia leaving the villa comes after The Sun recently reported that another unlucky islander will be dumped from the villa on Tuesday night (June 14).

The publication reported that a recoupling will take place during the episode but the person who is not chosen to be in a couple will have to leave the villa swiftly.

This will be the third departure since the reality show returned last week, due to Liam Llewellyn deciding to self-eliminate from the process in week one.

Liam gathered his fellow Islanders around the fire pit and said he didn't feel like he was giving the best version of himself in the villa.

In an emotional speech, Liam, 22, explained: "Obviously we all came here for the same reason but I haven’t really been feeling I have been giving 100% Liam.

"I know what 100% Liam looks like and I am miles off that. I’ve been thinking long and hard, this isn’t a spear of the moment thing.

"I have made the decision that I am going to leave the villa. It has been a breeze, and absolute ball."