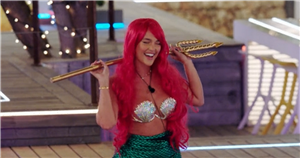 Love Island fans took to Twitter on Thursday night to slam the show's producers for putting Mary Bedford in a "bargain bin mermaid costume" during the heart rate challenge.

"Who did Mary dirty please? Looking like a 99p rip off of The Little Mermaid," wrote one viewer. While another added: "Poor Mary, they could’ve given her something sexier than that party city bargain bin mermaid costume!"

However, her mates also had something to say about the unflattering costume.

Taking to Instagram, they wrote: "Come on guys… you know Mary's style… You really think she picked this outfit? SHE STILL LOOKED CUTE THOUGH."

In a video posted by Mary's best mate, former Coronation Street actress Arianna Ajtar, Arianna can be heard saying: "Oh my god! Why have they given her that outfit"

She also took to Twitter to air her frustrations: "Mary had the potential to have been one of the best love islands heart race challenge looks ever done and instead they made my friend look like she’s gone into luvyababes blindfolded & took the first outfit she could."

The comments came after the show's signature heart rate challenge was aired. The game sees the Islanders dress up in sexy outfits and perform a dance one by one in a bid to raise each other's heart rates.

While Millie Court donned a skimpy Lara Croft look and Faye Winter sported a high-leg, red PVC leotard, Mary got given a not-so-sexy creature from the deep outfit.

On Friday morning, Mary's friends took another swipe at Love Island bosses with a gorgeous picture of Mary dressed in a risqué bunny outfit, shared on her Instagram account.

They captioned the picture: "Now we've had the night to stabilise our heart rates, shall we pretend this was Mary's outfit?"

Make sure you never miss our exclusive Love Island scoops by signing up to OK!’s daily newsletter.

Past Islander Rosie Williams wrote: “Bless her!! If anyone can make the little mermaid sexy though it’s Mary!”

In a preview for Friday's show, it appeared Mary is about to get caught in the midst of Liberty Poole and Jake Cornish's rocky patch.

Liberty had previously been left sad and tearful after spotting Jake and Mary having a cosy chat by the pool instead of him spending time with her, after she was concerned about his behaviour the night before.

Love Island continues tonight at 9pm on ITV2 and ITV Hub. Episodes are available the following morning on BritBox.