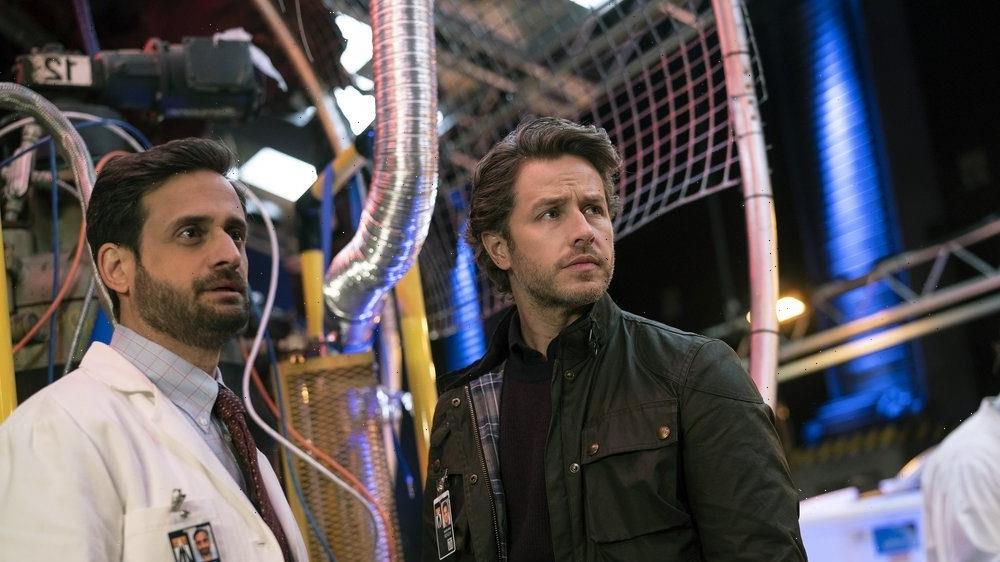 SPOILERT ALERT: This story contains details from the Season 3 finale of NBC’s Manifest.

Tonight, NBC’s Manifest came to the end of its third season, going out on an ominous note, with the death of an original cast member.

When two-part finale “Mayday” kicks off, one-time NYPD detective Michaela Stone (Melissa Roxburgh) is experiencing her “most powerful” calling ever. In it, she finds herself back on Flight 828, finding that the Montego airliner is oozing with blood. While she sets out to confirm the meaning behind the calling, she interprets from it that an 828er is going to get hurt, and sets out to stop that from happening.

Around the same time, Ben (Josh Dallas) and Grace Stone’s (Athena Karkanis) son Cal sneaks out of the house and heads to Project Eureka headquarters, in hopes of getting the NSA to stop experimenting on the 828 tailfin. “It can’t be here anymore,” the boy says. “Otherwise, something bad will happen.” Though Ben is on house arrest, he and Grace manage to get to the lab, to retrieve him. But just as they do, Cal starts developing burns over his entire body, related to his callings. 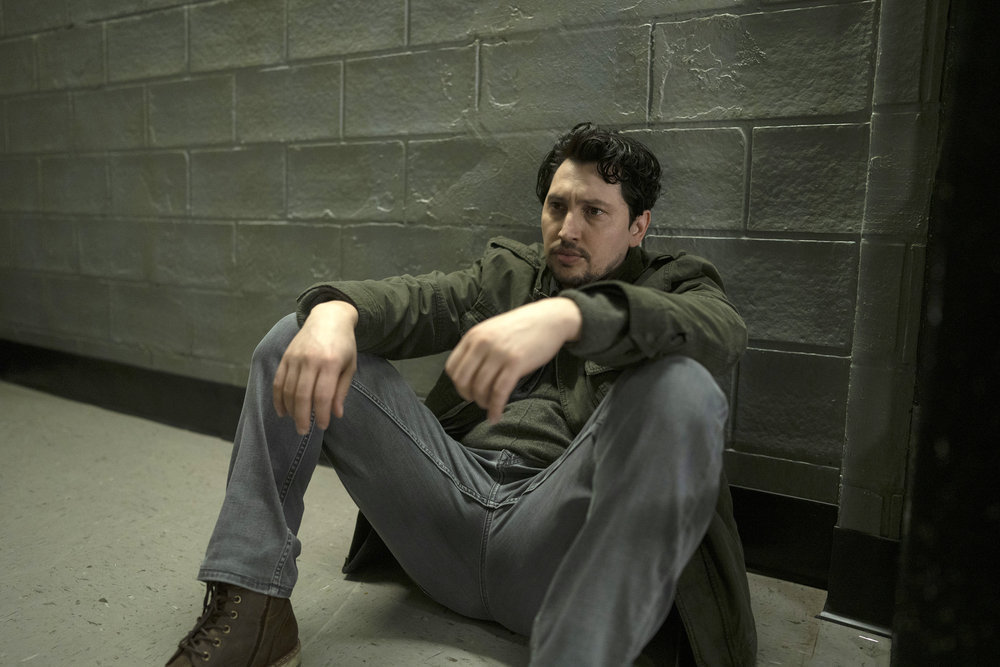 We then cut to Eagan (Ali Lopez-Sohaili), Randall (Christopher Piccione) and Adrian (Jared Grimes), disillusioned 828 passengers who have found themselves in a jail cell. Eagan suggests they take action against the government they believe is persecuting them, as well as Ben and Michaela. From his and Adrian’s perspective, the end of times may well be near, and if it is, Ben would be to blame.

The trio discuss the myth of Noah’s ark, of which there are multiple versions. While it’s commonly held that Noah is the savior of mankind amidst the apocalypse, another version suggests that he is actually an agent of the apocalypse—someone who invites the flood out of disgust with the world, and saves only his family, leaving everyone else to drown. In their mind, Ben is Noah—the dangerous traitor and “executioner”—and only the shedding of blood can save the world.

Later, Michaela discovers that Adrian is the key to unlocking the mystery of her calling. When it appears before her again, she sees him aboard 828, and sees that he looks overcome with guilt and shame, as if he’s done something terrible. At this point, she gleans that the calling is not about an 828er dying, but rather, about one killing. Unfortunately, by the time she comes to this frightening realization, Adrian, Randall and Eagan have already gotten out of jail, and are planning to take up arms against the government and her brother, at an unknown location.

Back at the lab, Ben tries and fails to blow up the tailfin in a desperate attempt to save his son’s life. He then has an epiphany, realizing that it doesn’t need to be destroyed. Instead, it needs to be returned to the ocean from whence it came. 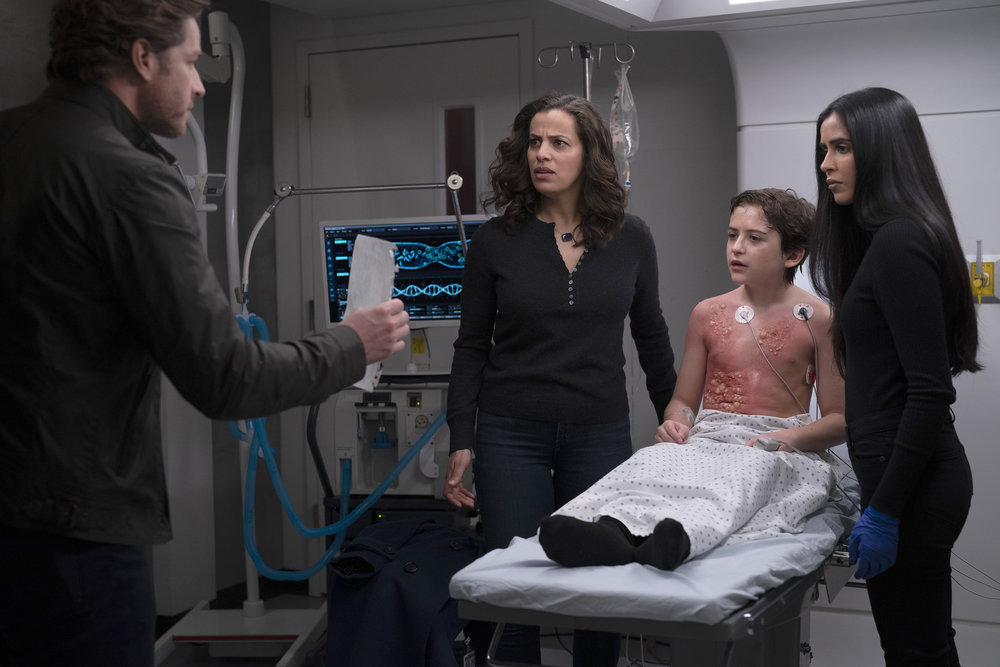 Vance tries to stop the NSA’s testing but is overruled. Then, to show the agency he is right about the tailfin, Cal takes the dramatic step of touching it, at which point he evaporates into thin air, to the horror of his parents.

Elsewhere in “Part 1,” tensions run high between Michaela and ex-fiancé Jared (J.R. Ramirez), and her husband Zeke (Matt Long) expresses his belief that Jared still has feelings for her. Then, there’s Jared’s girlfriend Sarah (Lauren Norvelle), who comes to believe Saanvi played a role in the death of her mother (Elizabeth Marvel’s The Major) and has him investigate.

In “Mayday: Part 2,” we see that Angelina (Holly Taylor) has been recruited to the resistance by Eagan, as Randall and his girlfriend Erika (Susan Pourfar) hold up a gun store, so that they can get access to more arms for their war. Thereafter, Erika is caught by the police and gives them the address of the warehouse where Adrian and Eagan are hiding out.

When they find out that Erika was taken into interrogation, Adrian and Eagan butt heads about next steps. Adrian starts to doubt Eagan’s plan and suggests they put it on pause until they find out what’s happened with Erika, but Eagan demands that they press on; Eagan is out for blood, while Adrian now believes violence should be their last resort, in their pursuit of justice. By the time Michaela and the NYPD get to Eagan and Adrian’s hideout, they’re gone once again. Still, Michaela discovers house blueprints that were in Eagan’s possession, which prove key in tracking him down.

At the lab, Dr. Gupta expresses her belief that science, not faith will bring Cal back. She holds the tailfin hostage at the lab, but ultimately has a change of heart, when she comes to understand that the callings are real. When Dr. Zimmer (Patricia Mauceri) tries to prevent Ben and Vance from taking the airplane part back to its home in the sea, Gupta asserts her authority to help make it happen. Subsequently, Saanvi and Ben discover where exactly the tailfin needs to go, and set out to sea on a coast guard boat, in the middle of an electrical storm, to put it back where it belongs.

Later, we learn that the blueprints Eagan had in his possession were for Vance’s residence. He and Randall break into it to uncover definitive proof that the government is trying to destroy 828ers. The plot thickens when Vance’s son walks in on them, and Eagan has a radical change of heart, keeping Randall from taking his life. Vance then learns that his son has been taken hostage, and he is able to save his life, with help from Jared.

After Eagan and Randall are arrested and taken away, Jared confronts Michaela, who admits she knows what Saanvi did and has been keeping it from him. While he expresses his disappointment with her, and explains that he now has no choice but to end things with Sarah, we learn that Jared has, indeed, been harboring feelings for Michaela.

Saanvi and Ben manage to get the tailfin back into the ocean—though Saanvi almost drowns in the process—and once in the water, it starts to glow before disappearing. Given that he succeeded in his mission, Ben is stunned to find that his son doesn’t reappear. Then, he finds himself in a calling aboard 828, alongside Saanvi, where a teary Cal tells his father that he has to go, and that “this is the way it has to be.”

After Adrian experiences a crisis of conscience and abandons Angelina, he sends her in pursuit of her “guardian angel.” She finds her angel in baby Eden when she breaks into Ben’s house, stabbing Grace to death and carrying him away with her. It turns out that the person of concern, based on Michaela’s initial vision, was Angelina after all.

As Grace succumbs to her injuries, she sees a teenage version of Cal, who reassures her that everything is okay, and that he now knows what he needs to do. The episode ends with Gupta, who sees the entire 828 airliner appear abruptly in the Project Eureka lab, with its pilot inside, before just as quickly disappearing.

Manifest is produced by Warner Bros. TV and Universal Television. While creator Jeff Rake has long maintained he has a six-season plan in place for the series, with much of the story worked out, its fate is currently up in the air, given that a fourth season has not yet been ordered.