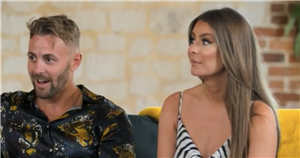 Married At First Sight UK's Tayah leaves Adam gobsmacked on Tuesday's episode as she declares that this time next year she will be pregnant.

During the episode, Tayah and Adam talk to Morag and Luke during the second dinner party where they comment on how they always seem to be on the "same page".

To which Tayah declares: "Do you know what we've been talking about, this time next year I'll be pregnant."

With Adam joking: "Don't drop that bombshell. She's not pregnant by the way!"

To which Tayah clarifies: "Yeah, I'm not pregnant but this time next year I will be." An "uncomfortable" Adam adds: "She's having visions of it. We've not properly agreed that's going to happen by the way, she's just having visions."

Tayah continues: "Our little Tay, imagine how sassy that child would be? I would love it!" with Adam nervously sipping on his drink.

To which the show's dating experts, who are watching the interaction in a separate room, comment on how "awkward" and "uncomfortable" Adam looks. With Melanie Schilling adding: "She's having visions of it… I'm not getting the impression that this is a couple's decision right now."

Earlier this month, Tayah and Adam confessed their love for one another despite the fact they had only been married for around a week.

They also spoke about starting a family, with Adam declaring that Tayah was his "first and last love". Adam sweetly said: "You've made my life everything I've ever wanted. I've absolutely loved every single minute of it, I've never experienced the feelings I've felt with you before.

To which Tayah replied: "I love you too, I really do, so much!"

She added: "Everyone talks about a whirlwind romance and I’m like does that happen but now everything makes sense. I feel as if Adam and I are literally made for each other."

Married At First Sight UK runs Monday to Thursday nights at 9pm on E4. Catch up on the series so far on All 4.

For more juicy gossip on your favourite stars, Married at First Sight UK and the couples, sign up to our daily newsletter here