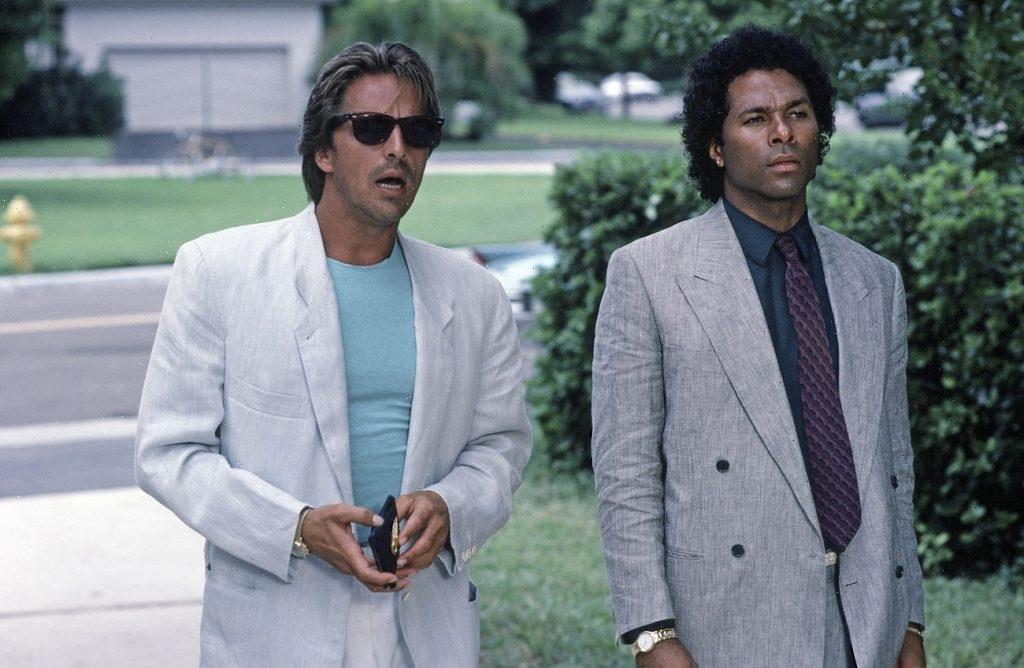 Although Miami Vice was only around for five seasons, the show has had a major impact on the television industry and American culture. It reimagined the way that television shows could be styled, and it gave a complete overhaul to the use of popular culture in detective shows. Perhaps the area that saw the most impact from the show was the city of Miami itself. Learn more about the show, its style, and its role in preserving unique buildings in the area.

What is ‘Miami Vice’?

Miami Vice is an American television series focusing on two detectives that work undercover in Miami, Florida. The show follows James “Sonny” Crockett, played by Don Johnson, and Ricardo “Rico” Tubbs, portrayed by Philip Michael Thomas, for five seasons as they worked to solve crimes that were loosely based on real crimes that occurred in Miami in the past. Miami Vice ran from 1984 – 1990 on NBC.

Most episodes focus on crimes like drug trafficking and prostitution. The characters often cynically discuss the “Whack-a-Mole” nature of detective work, in that cartels bring in new workers as soon as their current ones are detained. The first two seasons are known for being lighthearted and sprinkled with humor, but the later seasons take on a much darker tone.

The show is still praised for taking on social issues of the day, such as the AIDS crisis, the longstanding effect of the Vietnam War, child abuse, homophobia, and more. According to IMDb, Miami Vice won 13 awards, including Primetime Emmy Awards and Golden Globes, and was nominated a total of 29 times.

Miami Vice enjoyed decent viewership and ratings, though that began to drop after season four. The staff decided to make the fifth season the final season, but Michael Mann directed a film adaptation of Miami Vice that was released in 2006.

The style of ‘Miami Vice’

Miami Vice is known for its unique style, which includes the outfits of the characters, the style of the surrounding buildings, the colors of the vehicles driven, and even the music that was played in the background. Miami Vice relied on a pastel color pallet that was unlike anything else on television at the time. According to an NBC archive, People remarked that it was, “the first show to look really new and different since color TV was invented.”

The creators of the show were so invested in the art and colors of the show that the executive producer, Michael Mann, forbade “earth tones” from being used on the set. After Mann departed a few seasons later, the style changed a bit, but still largely relied on pastel colors. Americans began embracing the use of a sport coat over a T-shirt and wearing loafers without socks thanks to the outfits worn by the main characters on the show too.

Aside from the outfits and cars, perhaps the most important stylistic choice was the art deco buildings in the background.

Thanks to the show, Miami’s art deco buildings are protected

The areas where Miami Vice was shot were full of historic art deco-style buildings, but many of them featured neutral or beige colors. According to Mental Floss, the design crew on Miami Vice teamed up with the Miami Design Preservation League (MDPL) and set out to beautify South Beach by adding pastel colors to old buildings that would be used in shots for the show.

This brought a whole new interest to Miami, and it helped bring tourism to the Art Deco district, bringing a financial boost to an area that had struggled in the past. Mann, the former executive producer for Miami Vice, even sponsored an early iteration of Art Deco Weekend, which has continued to take place every year since.

Whether you are a fan of the show or not, it’s impossible to deny the effect that Miami Vice had on our culture, and more specifically the South Beach area.