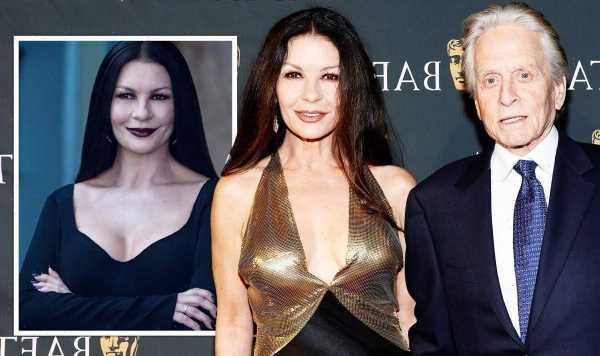 Netflix’s latest hit series was quickly renewed for a second season, with the full cast expected to return alongside Jenna Ortega’s iconic portrayal of Wednesday Addams. Among them was Welsh actress Catherine Zeta-Jones as her ghoulishly glamorous mother Morticia, who recently appeared on ITV’s Lorraine to share her thoughts on the series taking off alongside hubby, Michael Douglas.

Zeta-Jones was rather surprised to see the Addams Family reboot taking off as much as it has.

“When Tim Burton asked me to do it, it was like, ‘Whatever you want me to do, Tim’,” she recalled while speaking to Lorraine’s Ross King alongside her husband, Douglas.

“And then the idea of me playing Morticia, which is such an iconic, wonderful, juicy character, was wonderful.”

The film and TV actress appeared alongside Luiz Guzmán as guest stars for the series as Wednesday’s morbid yet doting parents, Morticia and Gomez.

They were joined by other guest stars including Fred Armisen as Uncle Fester and the original Wednesday, Christina Ricci, as Marilyn Thornhill.

However, it was lead actress Ortega who most impressed the Hollywood star on the set of the first season.

“It turned out so much better than, I think, anyone anticipated,” Zeta-Jones told the entertainment reporter.

“Jenna Ortega is just marvellous as Wednesday, and through the eyes of Tim Burton, it’s a lot of fun.

Her famous husband Douglas was full of praise for his other half as he chipped in rather sweetly: “She killed it as Morticia. Killed it.”

Throughout the first season, Wednesday begrudgingly befriends her new roommate at Nevermore, Enid Sinclair (played by Emma Myers), while uncovering a sinister mystery.

She eventually unmasks Ms Thornhill as Laurel Gates, the surviving sister of a student who was seemingly murdered by Wednesday’s father.

Thankfully, her plan to terrorise the students with a creature known as the Hyde and resurrect Joseph Crackstone was foiled, but fans can expect plenty more trouble at Nevermore next term.

Meanwhile, Wednesday still has a creepy stalker following her every move to watch out for over the summer.

Netflix wasted no time in greenlighting a second season of Wednesday, though it’s not expected to be released by early 2024 at the earliest.

During the long wait for more Addams Family hijinx, Zeta-Jones can be seen in Disney+’s National Treasure revamp, Edge of History.

Plus, her breakout co-star Ortega is returning to the Scream franchise this year for the sixth film in the slasher franchise, releasing in March.

Wednesday season 1 is available to stream on Netflix.