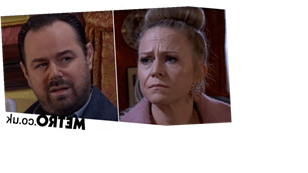 The former landlord of the Queen Vic had previously made clear that he didn’t want the police involved.

What’s more, Frankie (Rose Ayling-Ellis) begged him to keep shtum about what Katy did to him, and he ultimately promised her that he would.

However, Linda (Kellie Bright) made a shocking discovery last night, as she learned that Katy had abused others.

After giving it some thought, she revealed her discovery to Mick, who was incredibly emotional to learn that Katy was a serial child abuser.

He knew something needed to be done, and therefore he told Frankie that he intended on going to the police.

Frankie wasn’t pleased, and pleaded with him to reconsider, but Mick refused to do so, telling Linda that his childhood was robbed by Katy, and therefore it’s time she paid the price.

If so, what will this mean for his relationship with Frankie?

You can access support and information from NSPCC here.

You can access support and information from SurvivorsUK here.

EastEnders continues Thursday January 28 at 7:35pm on BBC One.