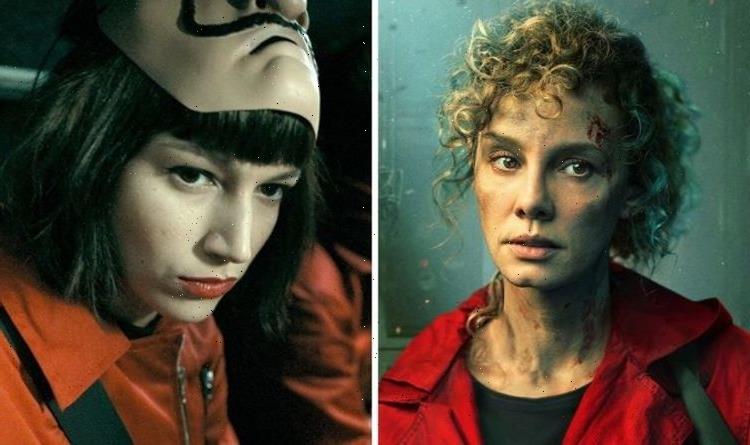 Netflix subscribers now have just under three months to wait before the devastating conclusion to the worldwide streaming hit comes to an end. After fan favourite Tokyo (played by Úrsula Corberó) bravely sacrificed herself for the Money Heist team, could the series pull off one last shocking twist before the Spanish drama comes to an end?

Another Money Heist theory has once again cast doubt over the fate of Tokyo in the latest instalment of Netflix’s international sensation.

Following a tense altercation with chief of security, Gandia (José Manuel Poga) and the Special Forces team, Tokyo set off a cluster of grenades strapped to her chest to bide the rest of the robbers some time.

Although their escape from the Bank of Spain is much more assured, both the fans of the show and Tokyo’s family of robbers were left inconsolable heading into the final chapter.

Despite being caught in a huge explosion, there are still some viewers who believe there’s a chance for Tokyo to reveal she actually survived the blast when Money Heist returns.

When giving the new season a closer watch, one fan felt Stockholm’s (Esther Acebo) part in the Volume One finale could provide a way to explain the robber’s miraculous return.

As Tokyo was dealing with new villain Sagasta (José Manuel Seda) and his team, Stockholm accidentally injects morphine into her arm when dealing with a wounded Helsinki (Darko Perić).

Stockholm’s resulting condition could have led to her interpreting the events around Tokyo’s supposed demise rather differently.

User DaddyDenzeltron posted the theory in a recent thread encouraging other viewers to move on and accept the character’s death.

The Redditor hit back: “I’ve read somewhere that some people believe that we were seeing things through Stockholm’s perspective while she was high.

“And that because she was high, that she might not be able to see the true reality, thus leaving a chance for Tokyo to be alive.”

Although morphine isn’t typically considered a hallucinogenic drug, excessive use can lead to a delirious and impaired mental state.

Therefore, it could be possible Stockholm gave herself a dose large enough to hallucinate Tokyo’s death, especially when we factor in Money Heist’s often outlandish TV logic.

An explosion certainly seems to have occurred, but Stockholm may have been perceiving the passing of time a little differently to her colleagues, giving Tokyo a chance to escape.

Unfortunately, other fans have argued against the theory, maintaining the events are still narrated by Tokyo in line with the rest of the series.

The original commenter even admitted: “This of course doesn’t make any sense to me and I don’t believe this at all.

“If the writers end up going down this route, then the show might have exceeded the plot armour that Game of Thrones had.”

At this point, Money Heist fans would probably be more annoyed with the series if Tokyo was brought back from the dead.

They would certainly have to suspend their level of disbelief to dizzying levels to accept she managed to survive the combined blast of five grenades.

While it was excruciating to say goodbye to one of the series’ most popular characters, it might be better for the writers to avoid a last minute twist to bring her back.

Money Heist Part 5, Volume 2 will be released on Friday, December 3 on Netflix.