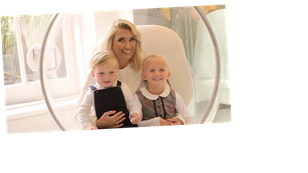 Billie Faiers and Greg Shepherd were left red-faced during a photoshoot when their two year old son Arthur burst out with expletives.

The awkward moment was caught on camera, shown in the second episode of The Mummy Diaries, as Billie laughed off her son's words but later cajoled Greg for his influence.

Billie had both her children on her lap in a swinging chair as the photographer snapped away as Arthur suddenly began to shout "b*******".

In the clip Billie and Greg are sat chatting about what happened, as the 30 year old reality star says to her husband: "Arthur copies everything, and he's become quite clingy with you, hasn't he?"

Greg nodded in agreement before scenes from the photoshoot are shown, the businessman looks on at his wife and two kids who are encouraged by the photographer to smile for the camera.

But then Arthur swears much to the shock of Billie who looked confused and turned to her son: "What? Shush! Stop, stop, now!"

Billie awkwardly smiled as Greg came into shot to try and keep his son quiet. The pair carried on discussing the moment: "When he said that word, I wanted the ground to swallow me up, because instantly you feel like a bad parent.

Greg nodded and said: "Yeah like 'well where's he heard that one then?'

He tried to pass on the blame and laughed to Billie: "It slipped out from my sister's mouth!"

Immediately after the swearing episode, Billie said to Greg: "I'm really upset with you. Where's that come from?"

Greg answered: "Well you know where it comes from…"

The parents laughed about the incident later, as Greg mentioned his sister: "She'll be getting a telling off for this.

"Kids are kids at the end of the day. He doesn't know what it means."

Elsewhere in the Faiers-Shepherd household Billie and Greg are in a battle of will with their five year old daughter Nellie, who hasn't slept in her own bed for five years.

The couple, who just celebrated their first wedding anniversary with a surprise trip to the Maldives, explain to cameras that every night without fail at around 3am Nelly will creep in bed with them.

But they hatch a plan involving fairies and some stickers in the hope that the youngster will spend a whole night in her own bed and they get a full night's undisturbed sleep.

The new series of Sam and Billie: The Mummy Diaries continues on Wednesday at 9pm on ITVBe