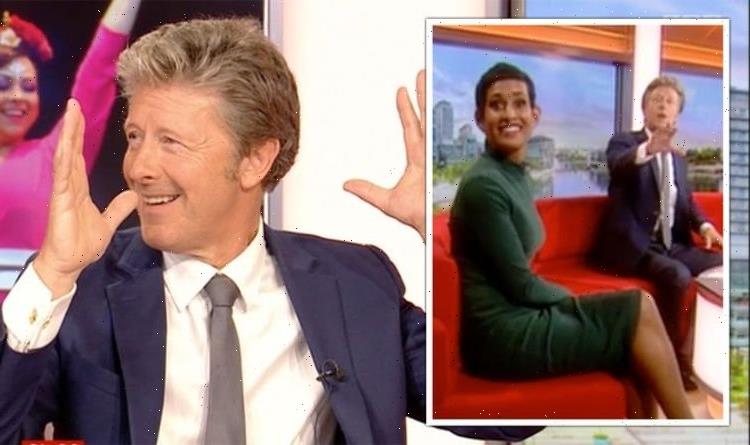 Naga Munchetty and Charlie Stayt were delighted to welcome Steps to the BBC show to discuss their upcoming album, What The Future Hold Pt. 2. While Charlie was determined to learn some of the group’s iconic dance moves and urged the studio to get involved, he was disappointed his co-presenter wasn’t so keen to take part in the fun.

Charlie was especially keen to join in with the iconic dance from their hit single Tragedy but Naga wasn’t so keen as she looked to the camera seemingly embarrassed by the situation.

Ian explained: “The thing is about steps routines. Anybody can do them and you can do them from the comfort of your own home.”

The group asked Charlie to do the Tragedy moves with the presenter admitting: “Apparently during the pandemic, we spoke and there was another occasion in which you tried to teach us [Tragedy].”

“You’ve erased it from your memory, clearly,” Ian joked.

As they all prepared to get their dance moved on, Charlie said: “Can we just repeat, we’re all doing it, everyone’s involved, and everyone in the studio too.”

Steps laughed hysterically as they all began holding their hands up to the song, however, Charlie quickly noticed Naga wasn’t taking part.

“You’re not doing it!” he told his colleague, before telling the singers: “No, she’s not doing it.”

Naga looked into the camera once again, appearing shy about taking part.

The presenter laughed and seemed relieved the studio were “now taking part” but Naga was still refusing.

Ian proposed they try the moves from their other singles One for Sorrow, Deeper Shade of Blue, and What the Future Holds.

Charlie was all for it and the group continually laughed as he was holding his hands up once again, asking: “Is she doing it now? I can’t see.”

However, after the fun and games were over, Claire noted: “The most amazing thing is when we’re on stage, we look out and everybody does it [the dance moves].”

“Yes, that’s the unique thing about us. I think not everybody’s got that, the whole audience joining in, everybody joins in with the song and singing along,” Claire continued.

Speaking about their new album and what they hope it will achieve, Lisa said: “It’s a difficult time for everyone right now.

“We’re here to lighten the mood and spread a bit of happiness and everybody needs that.”

However, someone on Twitter was mad that Naga refused to join in, writing: “Oh for f**k’s sake, just do the dance move #BBCBreakfast.”