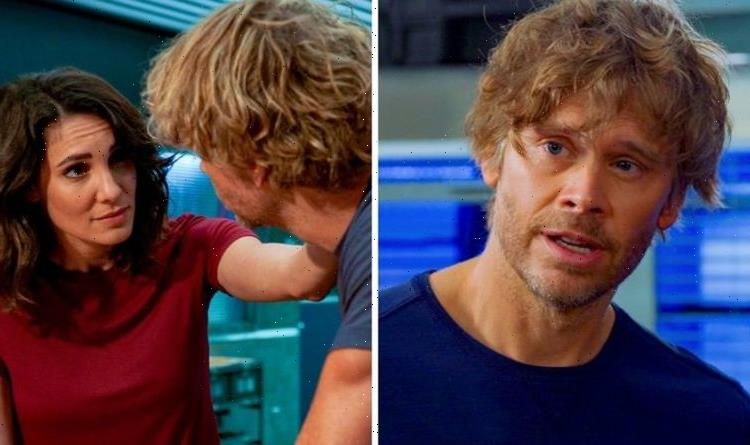 A new promo for the 13th season of popular spin-off NCIS: Los Angeles has teased a tragic case for Agents Marty Deeks (played by Eric Christian Olsen) and Kensi Blye (Daniela Ruah) in the next episode of CBS. When the pair witness a horrific hate crime in episode two, Fukushu, the popular NCIS couple start to question their lives in America.

Agent Deeks admits he’s disillusioned with America when he confides in his wife in the new trailer.

After finally becoming an official NCIS agent last season, he could already be making plans to find a job elsewhere.

Episode two kicks off when the team come across a vicious hate crime against an elderly Japanese American war veteran.

In the new clip, Kensi explains: “Someone beat up a 73-year-old Vietnam war veteran. Who does that?”

The synopsis of the new episode makes it personal as the veteran is confirmed to be the father of an LAPD officer.

He assures Kensi: “Someone that’s about to be hunted down by us.”

While the Los Angeles team is determined to bring the culprit to justice, the attack represents a stark reality apparent across the whole country.

Later, Deeks confesses he no longer recognises the country he lives in anymore.

“How does that happen in the greatest country in the world?” he asks his wife.

Fellow Agent Sam Hanna (LL Cool J) is determined to approach the case from all sides.

In the trailer, Hanna questions whether the attack on the US vet was, indeed, intended as a hate crime.

However, Deeks is unconvinced as he’s seen tearing up during a car ride with Kensi.

He laments: “This is not the country that I know and love.”

His confession could very well be pointing to Deeks and Kensi’s encroaching departure from the series this season.

Her words of wisdom convinced Nell to join her boyfriend Eric Beale (Barrett Foa) when he took the opportunity to move to Japan.

Plus, the flagship series has been continuing a trend of departures, with Gibbs (Mark Harmon), Ellie Bishop (Emily Wickersham) and Jack Sloane (Maria Bello) all confirming their exits this year.

The NCIS spin-off is well into its second decade now and could be preparing to pass the torch from the original cast to a brand new set of agents.