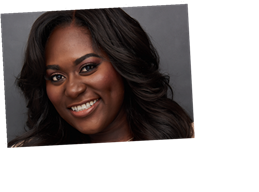 Grammy and three-time SAG ensemble winner Danielle Brooks is joining HBO Max’s Peacemaker, the spinoff series to James Gunn’s upcoming The Suicide Squad movie. She joins John Cena, who is playing the title character, and Steve Agee, who is reprising his John Economos character from the film.

Brooks will play Leota Adebayo in the series, which will explore the origins of Cena’s Peacemaker character, a man who believes in peace at any cost — no matter how many people he has to kill to get it. The Suicide Squad is scheduled to hit theaters on August 6. Gunn wrote all eight episodes of Peacemaker and will direct several episodes. He’ll serve as EP with the film’s producer Peter Safran with Cena as co-executive producer.

Peacemaker will be produced by Gunn’s Troll Court Entertainment and The Safran Company in association with Warner Bros. Television. Production is set to begin early next year.

Brooks is best known for her role as Tasha “Taystee” Jefferson in Netflix’s Orange is the New Black, for which she received three SAG Awards for the ensemble. For her performance, Brooks received two NAACP Image Award nominations for Best Actress in a Comedy Series.  She also was the recipient of the Young Hollywood Award for Breakthrough Actress. She is currently shooting the title role in The Mahalia Jackson Project for director Kenny Leon.

Brooks made her Broadway debut in the Tony-winning revival of The Color Purple. For her performance, she was nominated for a Tony Award, a Drama Desk Award, an Outer Critics Circle Award and received a Grammy Award as well as a Theatre World Award for Significant Broadway Debut.

Brooks released her four-track EP entitled FOUR. She co-wrote the four songs, which include “Seasons,” which was featured in the series finale of Orange is the New Black.