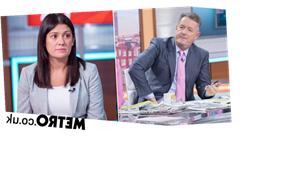 Piers Morgan has defended himself from claims he’s a ‘sensationalist bully’ as he got into an incredibly heated debate with Labour leader contender Lisa Nandy that’s been described as a ‘car crash’ interview by viewers.

After it was first asked of the potential Labour leader on Tuesday morning to share her thoughts on how many genders there are, with Nandy insisting babies are born assigned a sex, however they then grow up to self-identify, talk turned to athletes and trans rights.

And of course Piers referred to himself as the two-spirit penguin. Again.

Referring to when Labour MP Dawn Butler went on Good Morning Britain and suggested babies were ‘born without sex’ (thoughts she then clarified later on) Nandy wasn’t going to be drawn on giving her own definitive answer on how many genders there were.

As most debates do on GMB, the conversation descended into a near-screaming match as Nandy said to Piers: ‘I think you’re being trivial, because you’re talking about penguins when actually trans people are the most discriminated again people in the country…’

She added: ‘I think children are born and then they grow into adults…it’s not up to me to tell people who they are.’

As other members on the panel largely kept quiet, Piers suggested the gender debate was ‘difficult for people to understand’ as he then turned the conversation to women’s rights and transgender rights in athletics.

She instead brought up female runner Caster Semenya, with Piers and co-host Susanna Reid attempting to have Nandy answer their question about trans athletes who identify as a gender they weren’t assigned at birth.

Nandy was adamant she was not allowing their chat to become a ‘battle between two groups of people who deserve support’.

Piers insisted: ‘Tell our viewers whether you think it’s fair, as a trans activist said last week, that Usain Bolt could self-identify as female and compete against women born to female biological bodies.

However, Nandy accused the presenter of creating ‘more heat and less light’ as she added: ‘You are attacking some of the most marginalised people…by setting up a false war between women and trans people.’

Referring to the online messages about the heated back and forth, Piers said after he returned from the ad break along with Susanna: ‘Lots of reaction to the lively exchange there with Lisa Nandy…most people, I have to say, I think were leaning towards my argument on that…’

After he was accused of being a ‘sensationalist bully’ he refuted the claim: ‘Really? Is that how you categories that exchange? Me asking her to explain why women’s rights are not as important as transgender rights is me being a sensationalist bully?

‘Not sure about the sensational bullying, think it was me asking straightforward questions.

‘For a Labour leader candidate ca turn that into that into me attacking transgender people and accuse me of bullying is nonsense, dangerous nonsense.’

We’re sure this isn’t the last we’ve heard of this.