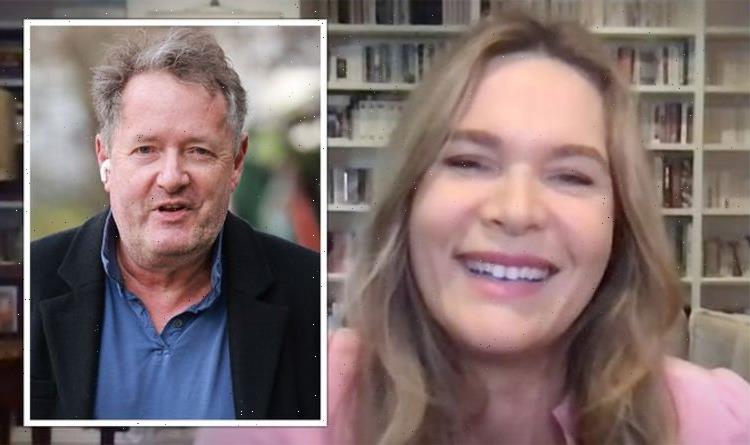 Journalist and novelist Celia Walden appeared on Sky News to discuss her new novel Payday, which focuses on three women in an uncomfortable work environment. However, the author teased her husband Piers Morgan could be making a dramatic return to TV sooner than audiences think but was reluctant to divulge any details about his return just yet.

When asked about the inspiration for the revenge thriller novel, Celia laughed and joked: “You mean a much-loathed man?

“Someone who has many women planning his downfall?” she jokingly replied.

However, the author explained: “I’m fascinated by the office cauldron of office environments.”

Celia went on to reveal she is getting sick of Piers being around the house all the time, asking: “Do you not want to just take him?”

Celia continued: “We should start a campaign, ‘Bring Piers to work day’ and if everyone could have him for just one day, it would give me a bit of relief!”

Teasing Piers’ return to TV, she continued: “I do know his plans but I can’t share them sadly. But he does have some.”

However, Celia was reluctant to reveal anything more but hinted her husband could be returning to screens “fairly soon”.

“I’ll let him lead the way on that,” Celia remarked about Piers’ return.

The host’s wife added it was difficult living with her husband when he was working early hours on Good Morning Britain.

“It was pretty unpleasant because, like all men, they are incapable of doing anything quietly,” she admitted.

“So the snooze button would be left on and you would have to turn it off after he left, every single door would be slammed, and his shoes would go on before anything else and we have wooden floorboards.

“Any hope of sleeping in past 4 am was impossible.”

She further added since Piers’ departure from GMB, she has been able to catch up on sleep which has been “pretty lovely”.

Celia also described how Piers’ former early morning affected how she wrote, explaining she was unable to get back to sleep so would always write early in the mornings after he left for work.

However, “TV would absolutely exhaust him” so Piers was “blissfully silent” for the rest of the day so she could continue working.

“The MPs usually got the worst of him,” she joked.

Piers posted a photo of himself alongside five women outside a cafe in London.

He captioned the post: “Great to meet my Yorkshire fan club this morning. Thanks for all the support, ladies!”

However, he added a major tease, writing: “I’ll be back on TV soon, don’t worry…”