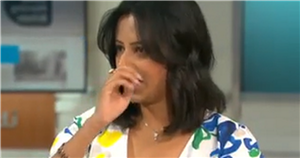 Good Morning Britain presenter Ranvir Singh broke down on live TV as she discussed how her eight-year-old son is hit by racist abuse at school.

The revelation came after Susanna Reid and Ranvir were discussing the racist abuse that Marcus Rashford, Bukayo Saka and Jadon Sanchoallm were all hit with after they missed penalties at the Euro 2020 final on Sunday.

Speaking about the abuse on GMB Susanna read a letter to Marcus Rashford from nine-year-old Dexter Rosier who told the footballer he was an "inspiration" which left her in tears.

Ranvir opened up after Susana read the letter aloud.

The emotional mother said: "The thing is it goes to what the heart of what we want for our children.

"My son going to school, he's talked about the racism that he's faced, he's going to be nine."

Wiping the tears from her eyes, she continued: "But yeah you think about it all the time.

Ranvir sparked an emotional response on the social media platform Twitter, with fans flocking to support her.

One lady took to Twitter to tweet the breakfast television show: "I’ve been moved to tears this morning listening to Ranvir talking about her son.

"I felt her pain as a black woman that I am and a mother of black sons and grandsons.

"We live this every single day, this is our reality, there’s no escape… When is this going to change?"

Another said: "Watching you and Ranvir's emotion brought it home, tears rolling down. I'm very glad you all are trying to break down racism"

While a mother penned: "I’m a mum of mixed race kids. My 10 year old was recently subject to her first racial incident at school.

"I’m under no illusion that this is the last. As a mum it’s heartbreaking.

"We need more Marcus Rashford and team mates to fight the fight against racism. It is NOT ok!"

Good Morning Britain airs weekdays at 6am on ITV