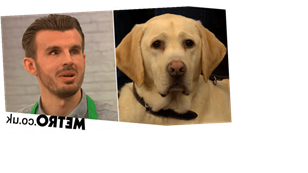 Ready Steady Cook crowned it’s first-ever visually impaired contestant and welcomed a guide dog into the studio on today’s show – and we couldn’t get enough.

Contestant Alex, who went head to head with his cousin Joe in the kitchen, bought golden labrador River with him – and he was a very good boy indeed.

Alex opened up about how River has changed his life dramatically, telling presenter Rylan Clark-Neal: ‘I couldn’t really put it into words to be honest.

‘I tried to keep myself as active as I could since I lost my sight four years ago, I had to start to learn to use a mobility cane and that sort of thing.

‘But it’s just not the same. Even just going down to the cafe or going to the train station was a whole build-up process.

‘And now I just get to go out for a walk just for the fun of it because of River. Even when he’s being a little sod!’

‘I’ve always been visually impaired,’ he said. ‘I had cancer in the eye and I was diagnosed at 14 months, so I’ve always had limited vision and vision in one eye.

‘But in January 2016, it all started to happen overnight and it all just went. It’s starting to do everything again.’

Meanwhile, his cousin Joe’s eyesight had a complete U-turn around the same time.

‘I have an eye condition and in 2015, I was lucky enough to undergo a gene therapy which basically meant I would never lose my sight.

‘But I suppose, what happened three months later to Alex, has really bought the two of us together more.’

Alex ended up winning today’s episode, becoming the first-ever visually impaired contestant to do so.

Ready Steady Cook airs weekdays at 4.30pm on BBC One.

If you’ve got a celebrity story, video or pictures get in touch with the Metro.co.uk entertainment team by emailing us [email protected], calling 020 3615 2145 or by visiting our Submit Stuff page – we’d love to hear from you.