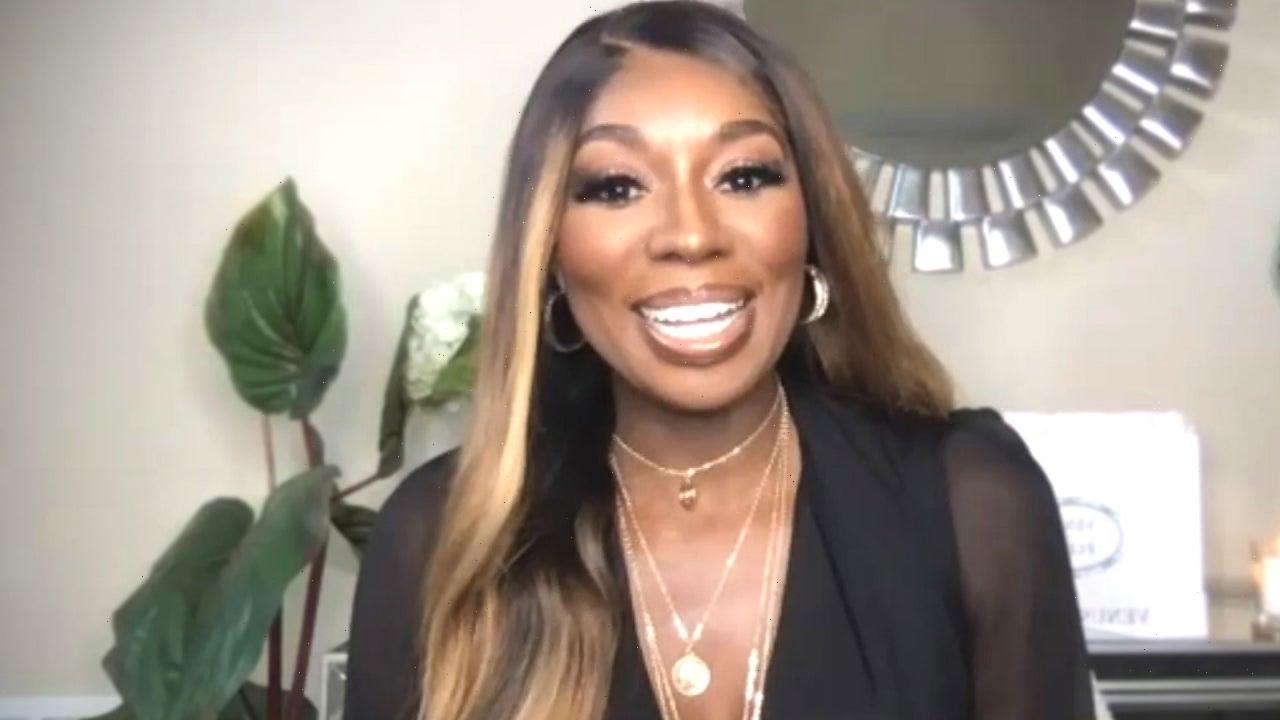 There will be no sophomore slump for The Real Housewives of Potomac‘s resident professor. Wendy Osefo — apologies, Dr. Wendy Osefo — is back for her second ride on the Housewives “roller coaster” (for the record, that’s her description of season 6), and a ride it promises to be.

“I think ‘season 5 Wendy’ was just a bit unsure,” the political commentator tells ET over video chat. “And I think ‘season 6 Wendy’ came into it more confident. OK, this is what I know. I’ve been around these women. This is what I can expect from them. And that was the big difference for me. But it’s so funny because even with that mindset, I got blindsided in season six. Even though I came in saying, ‘OK, I got this, I sort of know who I can buck at,’ I was still blindsided.”

Wendy’s favorite lesson learned from season 5 was to order two meals when going out with the cast, so you can take one home and actually enjoy it after filming. In season 6, she says, she learned the importance of who you’re inviting to your dinner table. “You need to know who’s friend or foe,” she notes. “There were a lot of dynamic shifts, so there’s people who I didn’t think I would be besties with, who I’m besties with. And there’s people who I thought I’ll be besties with that I’m not.”

It’s not hard to decipher who Wendy’s alluding to, as the season trailer teases plenty of drama between the mom of three and her one-time gal pal Gizelle Bryant. The two are now at odds, after Gizelle brought up to-be-revealed rumors about Wendy’s husband, Eddie, on camera this year.

“I am not immune to the fact that we are public figures, right? This is not a ‘woe is me’ conversation. When you’re a public figure, people go and talk about you,” Wendy explains of the situation. “People go and lie about you, and it is what it is. And I’m OK with that. I know what I signed up for. But there is, for me, a level of expectation that I felt we have within our circle. Especially when it’s a salacious blog that has also spread vicious rumors about her and her family.” 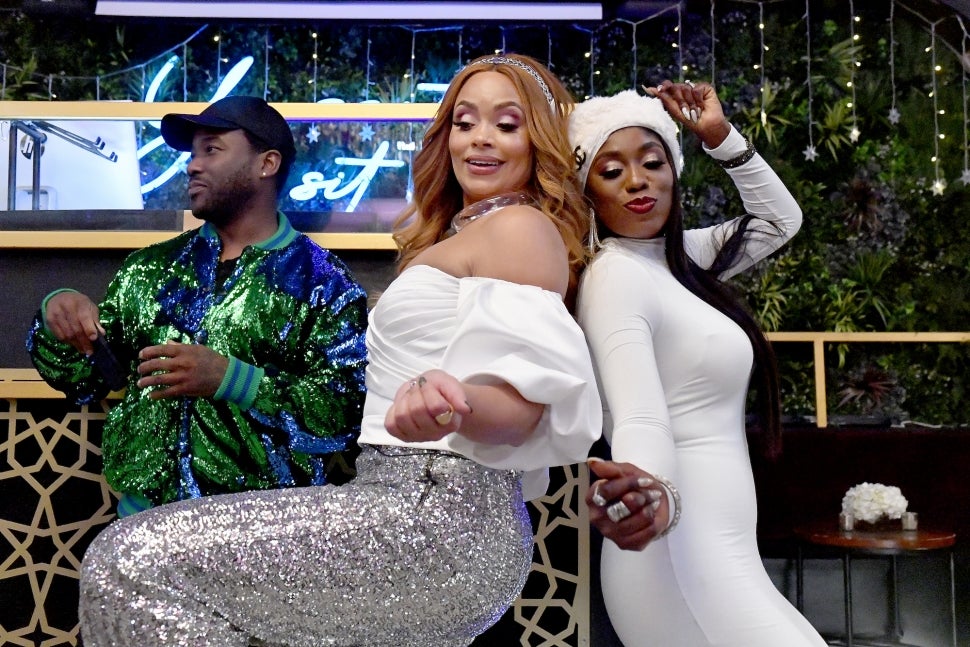 “It was like, this doesn’t make any sense to me because you are repeating a lie that, if I wanted to, I could repeat the same thing about you — anyone here — because that’s what they do,” she adds. “And don’t get me wrong, I’m not mad at the blogs. Everyone has to eat. Do you, you know? I’m not mad at it because we know our truth. And I’m confident in my marriage. It doesn’t matter. But in the same token, you have a level of expectation from your friends and you don’t think that your friends will ever give life to a lie. If anything, they will quell it because they’re your friends.”

Wendy says Gizelle is definitely the co-star who “disappointed” her the most in season 6 (“That’s because I was wrongful in giving her high expectations,” she quips), and when she looks back on what transpired between them, Wendy can’t help but think the attacks on her marriage were a premeditated plot carried out by one half of the “green-eyed bandits.”

“I do think it was premeditated,” she says, “and I also know that certain individuals on this show have a pattern in the practice of attacking people’s families. That’s what they do. That’s what they get off on. And you know, again, if that’s what you do, do you, but don’t do that with the Osefo crew. I don’t play. And I say that very clear, to not play with my husband’s name. Let the other people do that, the blogs, because that’s what they’re paid to do, but don’t you do that. And I think that this group quickly learned that I have what I call my sacred four, that’s my husband and my three kids. Talk about my wigs, my clothes, anything you want to, chile. Just talk about me, but don’t talk about a man who is not just a good husband but a good father. And his only crime is supporting me to be on this platform. Don’t do that because I will drag you.”

Or, to borrow a phrase from the trailer, she will “light yo’ a** up,” but Wendy says that statement (directed at Gizelle) might not be quite what it appears.

“What you have to understand from the professor is, when I ‘light yo’ a** up,’ it can be with my words and my oration skills,” she shares. “It doesn’t have to be light yo’ a** up in the way people think that it means because I am a master and a wordsmith.”

Wendy put those wordsmith skills to use this season. A memorable quote from the trailer is, “I see you for everything everybody ever said that you were,” again directed at Gizelle. 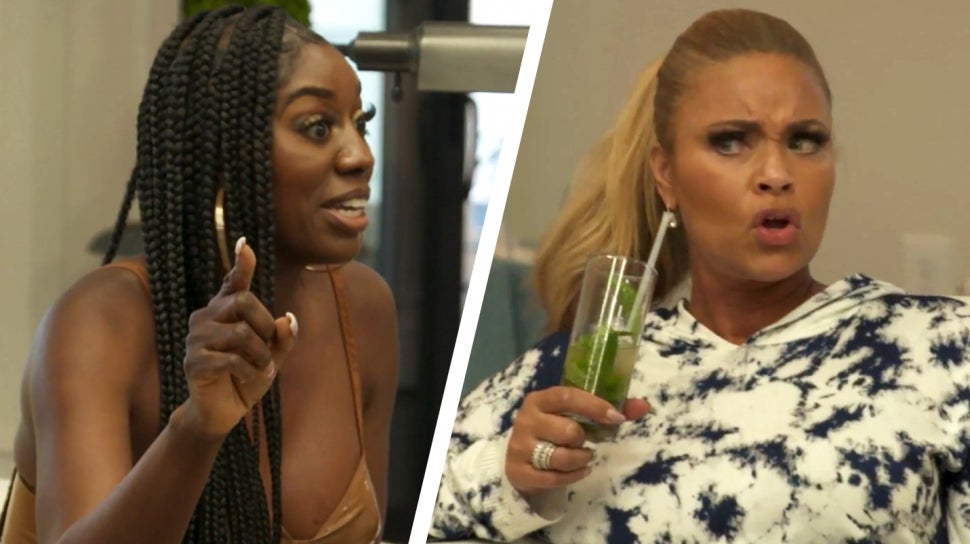 “I’m one of those people that I judge you based on what you give to me, and this season, what she showed me was everything that people said about her both on and off-camera is true,” Wendy says. “Everything is true. And I wanted to let her know that I see her for exactly what and who she is. And the wool has been pulled off of my eyes. Like, I know who you are. I’ve called your card. And I will deal with you based on the card I have read you to be.”

Pieced together, the “I see you for everything” and “light yo’ a** up” comments will come all at one time, along with Wendy suggesting production “cut these motherf**king cameras” as she goes in on Gizelle.

“This may be breaking a little bit of fourth wall here — I think that sometimes people forget that this is the real world, right? So don’t think you’re going to try to talk about my family under the safety blanket of saying, ‘Oh no, no, no. This is just for a show.’ No, this is real life,” Wendy says of what she meant by cutting cameras. “I understand that she has made it a pattern to have fake relationships, so it’s OK if people attack that. My marriage is real. This is not for TV. My marriage is real.”

Wendy says Eddie handled the whole ordeal better than she did, holding her back from taking things further with Gizelle.

“Eddie’s so good. Eddie’s only concern was, are you OK baby? That’s all he cared about,” she reveals. “He has really been a rock. … We’re going on 10 years of marriage, I didn’t think I could love him more. But just how he has been like, ‘Don’t worry about it. Leave this alone.’ Like, ‘It doesn’t matter,’ and just been such a gentleman. Because there were times where I wanted to get dirty and just attack back, and Eddie said, ‘Don’t do that. You’re better than that.’ And that shows me the type of man I married.”

One person no longer following Wendy on Instagram is Gizelle, who explained to The Breakfast Club that she made the choice after realizing she no longer found her co-star “interesting.” Wendy doesn’t think that’s the reason for the unfollow, though.

“I mean, if someone read me and dragged me for filth the way I did her, I would unfollow them, too,” she cracks. “I’m not mad. She shouldn’t follow me. Imagine me saying what I said to her and she still follows me? So yeah, she did the right thing.”

Wendy, however, still follows Gizelle. “Imagine me typing in her name to hit unfollow,” she says, making a face. “Maybe eventually, sometime in the future when I have time. But right now I am too booked and busy to type her name in my phone. But thank you for giving me the honor of typing my name in your phone.”

Wendy says viewers will see way more of Wen-day this year, her alter-ego of sorts who knows how to let loose. Fans planning any sort of drinking game around Wendy referencing her four degrees (a sticking point in season 5) will be disappointed; Wendy’s pretty sure she didn’t call out her education once while filming season 6. The new energy comes with a new look, as Wendy upped her style game between seasons (plus some other tweaks to be revealed in the season premiere).

“I don’t know if people realized, the cameras were at my house a month and a half after having Kamrynn,” Wendy says of season 5, name-checking her then-newborn daughter. “What you guys are seeing [in season 6] is the Wendy of before having a baby. This is what Wendy really is like, you know, I don’t throw my wig on like a baseball cap. Now, I can actually sit down for three hours and get it molded into the scalp.”

Overall, Wendy says no longer being the new girl is good. Stepping into that role in season 6 is Mia Thornton, a friend of Karen Huger’s who is sure to spice things up… or at least, toss things up. Fans were quick to clock the newbie throwing salad in Candiace Dillard’s face in the trailer. 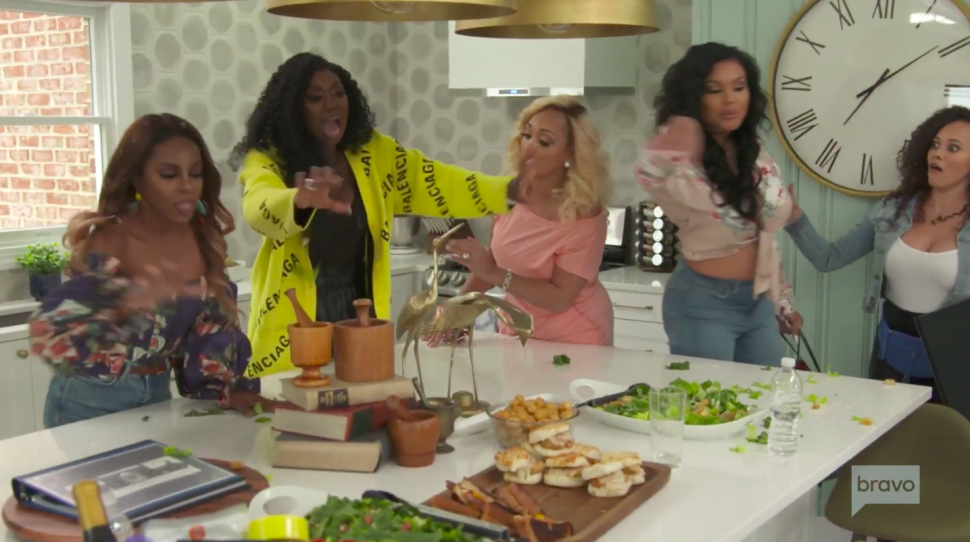 “[She has] some salad tossing skills, amongst many other skills that you guys are not privy to,” Wendy teases, “which surprised me. I would say she definitely surprised me out of everyone in the group. I had a few moments where I was like, OK…”

“Mia is different,” she says, “and the reason I say that is because when you’re in a group of other women, you sort of think we have someone that represents every personality type, but then incomes Mia. You’re like, wait. She’s different. She brings something different to our group.”

Mia fills a Monique Samuels-sized hole in the cast. The RHOP veteran opted to leave the series after a tense reunion, which capped off an already tense fifth season in which she fell out with nearly every woman on the cast in the aftermath of her physical altercation with Candiace.

“I wish her well and I wish her happiness and all that she does in the future,” Wendy offers up when asked about Monique, a curt and seemingly rehearsed response. While some viewers may feel like Monique’s time on the show ended without a proper goodbye, her exit did open up room for Wendy and Karen to grow close. They’ve done a near-180 from Wendy’s first season, in which Karen admitted to being “unimpressed” by her new co-star.

“I want you guys to see — I don’t want to give it away — but when I tell you, Karen is definitely like, she gets the crown, absolutely,” Wendy teases, saying the self-proclaimed RHOP “Grande Dame” stood by her like no one else amid the Gizelle drama. “She did what I would have expected some others to do.”