This Sunday in SEAL Team‘s midseason premiere, Clay enlisted a colleague to help be Bravo 1’s “swim buddy,” Sonny found assorted ways to deal with his anger issues, and Stella eventually shared a secret from back home.

Still hunkered down in Venezuela for their off-book-ish Omega mission, Bravo — after commandeering nuclear scientist Dr. Guillen’s vehicle to steer it into a fiery crash — proceeded to gather intel on the two Iranian defense experts who they discovered were in town. Ray returned with Brock from a three-day stakeout of the targets’ hotel to find their hideout a stank mess and rife with tension among Jason, Clay and Sonny. Ray asks Jason if a problem has arisen because of the debate with Clay about whether to capture or kill Guillen, but all Jason cares about is if the stakeout turned up any actionable intel.

Ray then feels out Clay, who ultimately confides that Jason has been forgetting things, in and outside of the wire — and, in fact, he was responsible for the (cough) “RPG” which nearly got Bravo killed a few episodes back. Ray can’t believe what he is hearing, and advises Clay to keep a lid on his potentially career-ending theories. For now.

Observing that one Iranian goes out for a daily run while the other grabs a brief drink at the hotel bar, Bravo sets out to sneak into their rooms and clone their laptop hard drives — with Davis very ably extending the one Iranian’s visit to the bar. Clay takes a bit longer than Ray to find his target’s laptop, so he winds up defying Jason’s order to cut bait and instead get what he came for, which only amps up the tension between the two once back at their base. Ray tries to make Jason see the hotel heist as a win, but Bravo 1 instead informs his team’s warrant officer that it’s his problem now: “Keep Clay away from me.”

The downloads from the Iranians’ laptops reveals that three members of the colectivo (biker-gang muscle for the local government) recently showed signs of radiation sickness, before dying. To confirm that radioactive materials are in fact already in play, Bravo is tasked with collecting at least one of the corpses for analysis. Before they head out, Ray meets up with Clay to share that he has seen evidence aligning with Clay’s claims (he observed Jason testing his memory), and they agree to covertly do their best to act as Bravo 1’s “swim buddy” and protect him and the team’s interests from one another.

Bravo aims to rob a grave, but instead find the dead bikers about to be lobbed onto a pyre. Bravo silently takes out two tangos standing watch, then goes to bag one of the bodies. Jason then abruptly splits off with Sonny to download the GPS from two trucks they passed by on the way in, even though Ray had advised they hold off on that until on their way out. In the process, Jason has to shoot, non-silently, two approaching tangos, and that results in some 30 men descending on the area. Davis and her drone are able to find Bravo a quick way out, though it requires scaling a wall — as such, Sonny takes a bit too much glee in hatcheting the lower leg off their chosen, cumbersome corpse, to use for analysis. There is a bit of a firefight as Bravo dashes to their exfil vehicles, but they manage to get away. 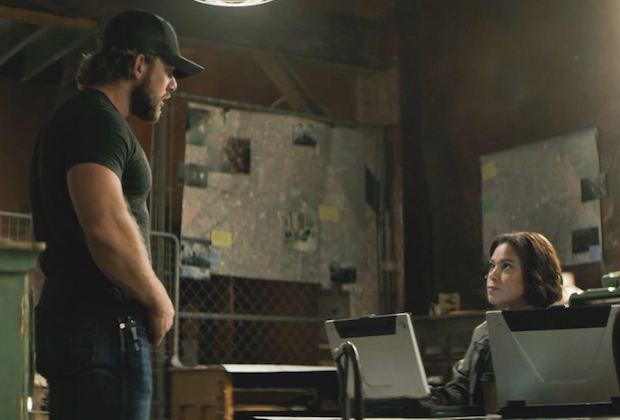 Back at their base, Clay — spooked by Sonny’s latest venting of anger — nudges his estranged BFF to cheer up with a baby Leanne check-in, but Sonny firmly brushes off the idea. (Worse, Sonny, when then confronted by Davis, tries to lay some blame for his sucky home life at her feet, claiming that she led Hannah to believe there was still something between them. But man, Lisa is not having that nonsense.)

Clay sneaks off for a video chat with Stella, even though it’s the middle of the night back home, saying that with all that is going on with Bravo, he can’t worry that she is hiding anything from him about their son’s NICU status. Stella admits that she has been withholding information — that she was able to hold their son the other day, and the little bugger is “so strong, just like his daddy”! Mom and Dad, as well as we, break out in tears.

Jason meanwhile calls out Ray for tasking the drone to watch over him when he went off-mission during the corpse heist. When Ray claims that he was just watching the impulsive team leader’s six, Jason wonders aloud why his double-click of their comms didn’t suffice this time as a status report. Further fueling Jason’s paranoia, at episode’s end we see him looking on, apparently out of earshot, as Clay and Sonny huddle to compare notes on Bravo 1’s latest actions…

What did you think of the midseason premiere, and are you afraid of how this “Bravo 1 against the world” tension might soon boil over and explode?