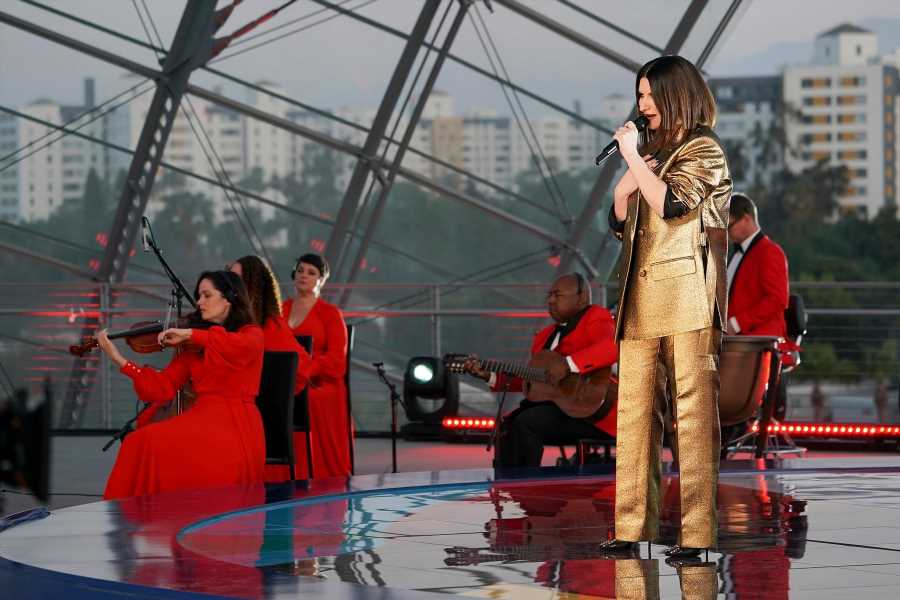 Things are of course very different this year, and all performances for the Academy Award nominees for Best Original Song were performed during the preshow, which began at 6:30 p.m. ET., rather than being interspersed and performed live during the Oscars event at Union Station in Los Angeles.

The nominees for Best Original Song span H.E.R.’s soulful anthem from Judas and the Black Messiah to Will Ferrell and Rachel McAdams’ melodramatically hilarious track from Eurovision Song Contest: The Story of Fire Saga. Songwriter Diane Warren, who has yet to win an Oscar, earns her 12th nomination this year for her contribution to the Italian film, The Life Ahead; she won a Golden Globe for the tune last month.

The Private Lives of Liza Minnelli (The Rainbow Ends Here)

It all began with a pre-taped performance of “Húsavik”, which took place in Iceland — complete with fireworks — with the rest of the performances taking place on the observation deck of the new Academy Museum of Motion Pictures. Check out the clips of the ones that are available at this time.

Eurovision Song Contest: The Story of Fire Saga was Will Ferrell’s tribute to all the glorious schmaltz and theatricality of the annual music competition that captivates a continent every year. In the film, winning Eurovision is the only thing that matters to Lars Erickssong (Ferrell) and Sigrit Ericksdóttir (Rachel McAdams), two Icelanders who have been vying for a spot in the contest their whole lives. Since it’s a Will Ferrell comedy, there are explosions, elves, and misunderstandings galore — as well as cameos by some of Eurovision’s most memorable contestants — as they ready their song, “Húsavik – My Hometown,” for the big night.

In The Life Ahead, a Holocaust survivor, Madame Rosa (Sophia Loren), who is also a former sex worker, makes a living looking after the children of other sex workers in a city on Italy’s east coast. When a 12-year-old boy (Ibrahima Gueye) robs her, she decides to take care of him, too, and she attempts to be a role model for him. Singer Laura Pausini, a superstar in Italy whose last seven albums have all reached Number One on that country’s charts, collaborated with songwriter Diane Warren on the film’s “Io Sì (Seen).” “When you learn to survive and accept the impossible, [and] no one believes you, I will,” she sings in Italian over a gentle backdrop of acoustic guitar and synthesizer, all the while promising, “I’m here.” In the English version of the song, she sings, “I want you to know that you’re seen.”

In 1968, a riot broke out outside the Democratic National Convention in Chicago. Authorities there arrested eight men, including Abbie Hoffman and the Black Panthers’ Bobby Seale, and charged them with conspiracy. Filmmaker Aaron Sorkin’s movie The Trial of the Chicago 7 dramatizes the bizarre legal proceedings that followed (including an explanation of why it’s “the Chicago 7” when eight men were charged). The movie’s soulful “Hear My Voice” features Beatles-esque music and a lush string arrangement and was performed by one of the song’s cowriters, Celeste. “These words are of fire, of hope and desire,” she sings, drawing on themes from the movie, “and I’ll let them free.”

Music and Lyrics by Leslie Odom, Jr. and Sam Ashworth

Filmmaker Regina King’s One Night in Miami … dramatizes a fictional meeting between Malcolm X, Muhammad Ali, Sam Cooke, and football player Jim Brown in 1964, when Jim Crow laws forced them all into the same motel together, despite their fame. The four men spend the night discussing civil rights and their individual responsibilities as black leaders. In the movie, Leslie Odom, Jr. portrays Sam Cooke, and he co-wrote the movie’s song, “Speak Now,” with Sam Ashworth, who co-wrote a few songs on Odom’s Mr. album. But the singer doesn’t try to sound like Cooke on the tune, which is a somber cry for people to lift their voices set to acoustic guitar, church organ, and a slow-beating tambourine. “Listen, listen, to the message of hope and the whispers of ghosts, listen, listen,” he sings, echoing the tone of the movie.

An FBI informant, Bill O’Neal (actor LaKeith Stanfield), joins the Illinois chapter of the Black Panther Party in the late Sixties and gets close to its leader, Fred Hampton (Daniel Kaluuya), in Judas and the Black Messiah. As the two grow closer, O’Neal begins to feel trapped between the two worlds. H.E.R.’s song from the film, “Fight for You,” fuses the hallmarks of Stax-era Isaac Hayes (orchestral string flourishes, wah-wah guitar, jangling triangle) with her own mellifluous R&B vocals as she sings about freedom. “Long as I’m standing, we could never lose,” she sings, “I’ma always, always fight for you.” The song’s nomination comes on the heels of H.E.R.’s two Grammy wins last night.