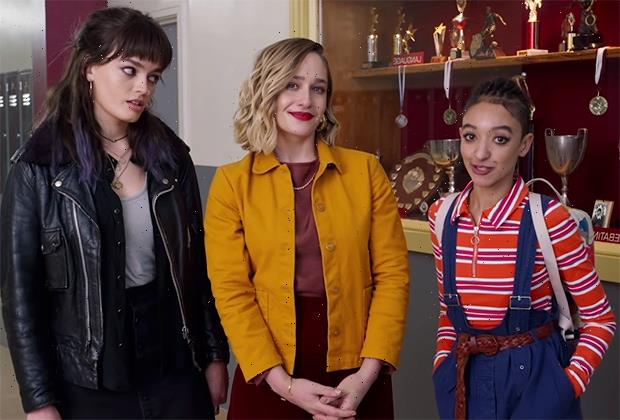 The new headmistress of Moordale Secondary is certainly going to have her hands full.

In this special promo clip (embedded above) for Sex Education‘s upcoming Season 3 (all eight episodes of which premiere on Netflix on Friday, Sept. 17), we see our favorite students banding together to help headmistress Hope Haddon (played by Girls’ Jemima Kirke) promote the benefits of a Moordale education (minus all the sex stuff, of course).

As Hope announces her new position along with her lofty goal of getting the school back on track, Otis, Viv, Ola, Maeve and the rest of the bunch pop in to beckon us to “Choose Moordale!” amid weird triangle chimes, comically forced dialogue and one unfortunate mention of last season’s chlamydia outbreak. (Yeah, they’ll probably want to cut that part out.)

Elsewhere in the faux commercial, Jackson awkwardly tries to charm Hope with some unwanted touching, while Eric’s new boo Adam traipses in front of the camera to ruin a perfect take. Maeve’s also not exactly camera-ready, as she urges us in full deadpan to “Choose Moordale. Please. So this can end.” Be sure to stick around to the end to see who’s lurking about outside!

The third season follows Otis (Asa Butterfield) as he enjoys the perks of casual sex, while Eric (Ncuti Gatwa) and Adam (Connor Swindells) explore life as an official couple. In addition, Jean’s (Gillian Anderson) life turns upside down as she awaits the arrival of her new baby, while “Aimee discovers feminism, Jackson gets a crush and a lost voicemail still looms,” the logline reads. “Prepare for commitment animals, alien phenomena, vulva cupcakes and much more of Madam Groff.” (Read our Season 2 finale recap if you need a refresher.)

It’s been a looong 20 months since we last saw the gang. Are you excited to reunite with Otis and his pals? Watch the new clip by pressing PLAY above, then drop some comments!