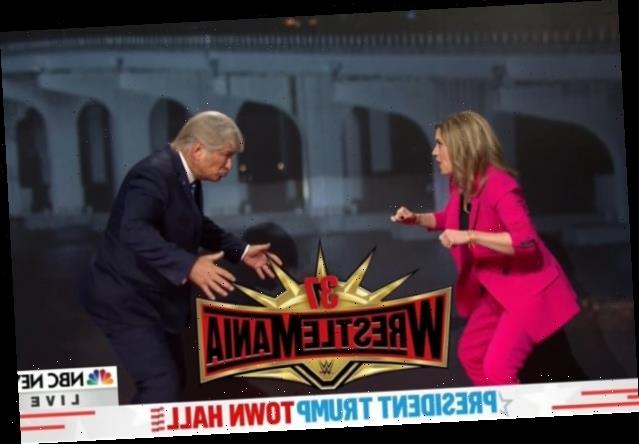 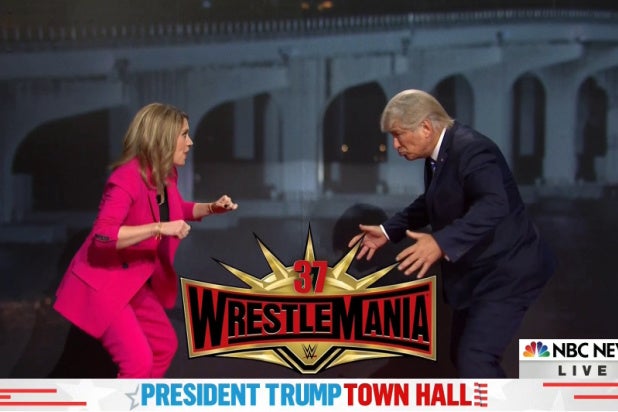 Surprising no one, the latest edition of “SNL” began with a parody of of the week’s most talked-about politics moment, the dueling
town halls by Democratic presidential candidate Joe Biden and Donald Trump. And of course, the cold open sketch featured an appearance by Jim Carrey as Democratic presidential candidate Joe Biden, joined by Alec Baldwin once again playing Donald Trump.

The joke: They portrayed the debates as they presumably were watched by a great many people — clicking back and forth between the channels. And basically took a victory lap for the way NBC up-ended expectations by actually giving Trump real pushback on his constant lies and evasions, by imagining that the Trump town hall turned into a Wrestlemania-style fight.

Also on hand were “SNL” cast members Mikey Day as George Stephanopoulos, who moderated the Biden town hall on ABC, and TK as Savannah Guthrie, who moderated NBC’s Trump thing — and yes, they found a way to squeeze in Maya Rudolph as Kamala Harris too.

First, a quick recap for those of you who might have forgotten why the dueling town halls even happened. After Trump came down with COVID-19 following the first Democratic Debate, it came out that he flagrantly broke the rules by arriving to that event too late to get tested. (Trump might have already had symptoms at the debate, just like his adviser Hope Hicks, one of the dozens of Republicans in Trump’s orbit who contracted COVID around that time.)

Understandably, the debate commission imposed safety measures on the second debate, scheduled for Oct. 15, that for unknown reasons Trump opposed. So on Oct. 8, after the commission declared that the debate would be a virtual event with Biden and Trump in separate locations, Trump simply quit in a huff and announced he’d hold one of his rallies instead.

Hours after Trump backed out, Biden locked down a solo town hall event on ABC, the same night and time that the second debate was originally scheduled. And then 6 days later, Trump arranged to hold one of his own on NBC at the same time as Biden’s. Those events could not have been more different: A calm Biden responded to voter questions with lengthy, detailed answers, while meanwhile Trump refused to disavow the racist right wing conspiracy theory QAnon. (Biden won in the ratings, if you’re curious.)

The “Saturday Night Live” version of the town halls took a lot of liberties with how things went in real life.

Specifically, the show took a strangely both-sides approach by pretending that every voter at Biden’s town hall was in the tank for Biden, that he only got softball questions, that no one actually pushed back or criticized him, and that Biden was doddering and gave meandering, off topic answers to questions. (None of these things are true.)

Also, for some reason, this segment of the bit also riffed on an extremely unsuccessful — and widely mocked — attempt by a Trump adviser to dunk on Biden by comparing him to Mr. Rogers, by having Carrey’s Biden put on a sweater and sing the iconic “Mr. Rogers’ Neighborhood” theme song.

The Trump section meanwhile stuck slightly more to reality, with a slightly exaggerated version of the real thing. It of course mocked Trump’s refusal to disavow QAnon, his refusal to say if he was tested for COVID-19 before the first debate, and his evasive answers. It also mocked the weird moment where a woman told Trump he’s handsome when he smiles. And of course, took multiple victory laps on behalf of Guthrie, ultimately concluding with a joke where the debate turned into a pro wrestling match.

“I won’t tweet once, because I don’t know how. I will have only one scandal: I will mistake Angela Merkle for my wife from behind and tell her she’s got a rockin’ caboose?

Love After Lockup exclusive: John gets bad news about Kristianna