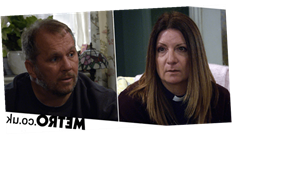 A reunion is seemingly on the cards for Harriet Finch (Katherine Dow Blyton) and Will Taylor (Dean Andrews) in Emmerdale, but will the former couple truly be able to put the past behind them?

Will was devastated when he discovered that Harriet had been having an affair behind his back, but the fact that said affair was with DI Malone (Mark Womack) made the situation a whole lot worse.

Given the fact that the bent copper terrorised him, Will was unable to forgive the vicar’s infidelity.

However, the two decided to remain living under the one roof so that the outside world will believe they’re still together — both for the sake of Lucas, and for the sake of keeping their Malone murder secret hidden.

Will has made clear that he wants nothing more to do with Harriet, but could that all be set to change?

Will he have a change of heart?

It would certainly seem so!

Yes, in the coming episodes, Harriet discovers that Dawn (Olivia Bromley) has been sleeping with men for money, and thus she has a heart-to-heart with the young woman.

She later informs Will about Dawn, and its clear that he’s grateful for her support.

He soon suggests that they go upstairs together — something which leaves Harriet in shock!

Will they rekindle their romance?