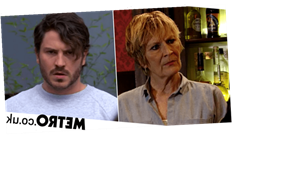 Shirley Carter (Linda Henry) has found herself in the complex web of killer Gray Atkins (Toby Alexander-Smith) in EastEnders, a man who has fallen apart since the death of his wife Chantelle.

Shirley aches for him and wants to help but what she doesn’t know is that Gray is a calculating and violent abuser and he is covering up the fact that he murdered Chantelle and took steps to hide his tracks.

After Gray lost his cool with a shocked Linda (Kellie Bright), Shirley was concerned about his state of mind and paid him a visit – only to discover that he as planning to gas himself and the children to death.

Shirley managed to avert a terrible tragedy and she has vowed to be there for Gray – but as Gray becomes reliant on her and it seems like she may even move in, will romance follow? And could Shirley soon discover the harrowing truth about what Gray is like and fall victim to his violence herself?

Mick (Danny Dyer) spots Shirley, still angry with her and comments snidely about her new friendship with Gray – Shirley insists she’s just being a good neighbour before Mick leaves.

But will Shirley accept? And how much danger is she set to find herself in as she grows closer to the every volatile and unpredictable Gray?

Could she be the one to discover his murder secret and bring him to justice? Or could she become another devastating statistic?