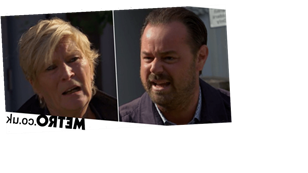 Shirley Carter (Linda Henry) was left in tears in EastEnders tonight (October 16), as Mick (Danny Dyer) revealed that he’s ashamed of her for leaving him when he was a child.

Viewers will know that Mick recently discovered that Frankie Lewis (Rose Ayling-Ellis) is his daughter.

Frankie soon put two and two together, and worked out that her mum Katy — who was Mick’s carer — had abused Mick, as he would’ve only been 12 when she was born.

As a result, Mick has struggled to come to terms with everything, and thus he’s been lashing out at those around him — particularly Shirley.

In last night’s episode, he accused Shirley of never being supportive towards her relatives when they’re in need of her.

Tonight’s instalment saw the animosity continue, as Mick continued to give his mum the cold shoulder.

Meanwhile, Tina (Luisa Bradshaw-White) revealed that she’d managed to track down Katy on social media, and the look of terror in Mick’s eyes piqued Shirley’s interest.

She confronted Mick on the matter, and apologised to him for abandoning him and leaving Katy to step in and look after him.

Shirley became more and more emotional, but Mick was having none of it, as he informed her that he’s ashamed of her for leaving him when he needed her.

Shirley broke down as Mick stormed off.

Will she discover the truth?

Will she learn that Katy abused Mick?

You can access support and information from NSPCC here.

You can access support and information from SurvivorsUK here.

EastEnders continues Monday October 19 at 8:10pm on BBC One.