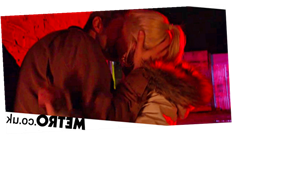 Lola Pearce (Danielle Harold) was left speechless during tonight’s episode of EastEnders when beau Jay Brown (Jamie Borthwick) proposed to her, and — after a heated argument ensued between the two — she found herself back in the arms of ex Peter Beale (Dayle Hudson), as they shared a passionate kiss.

After Lola discovered that she was pregnant, she resolved to discuss options with Jay. However, she soon came to realise that she needs to focus on the family she’s got right now, and therefore decided that she didn’t want the baby — which came as a blow to Jay, as he was looking forward to becoming a dad.

Lola reminded him that they hadn’t been together all that long, and therefore informed him that they’d be better off having a baby in the future when they were more solid — something which led Jay to thinking that proposing would be the solution to all of their problems.

During tonight’s episode, he did just that, as both he and Lexi orchestrated a romantic set-up, but as Jay got down on one knee, Lola was horrified. She ordered Lexi to her room and revealed that she doesn’t want to get married, and would prefer if they could stay as they are.

However, a heated argument broke out — one in which she said some rather hurtful comments — and thus Jay put an end to their relationship before storming out.

An emotional Lola headed to The Prince Albert, where she was shocked to discover Peter working behind the bar. The old flames proceeded to get drunk with one another, before setting off home.

However, they didn’t quite make it that far, as they ended up sharing an extremely passionate kiss.

Will Lola come to regret her actions?

Will Jay discover what she’s done?

EastEnders continues Thursday 12 March at 7:30pm on BBC One.