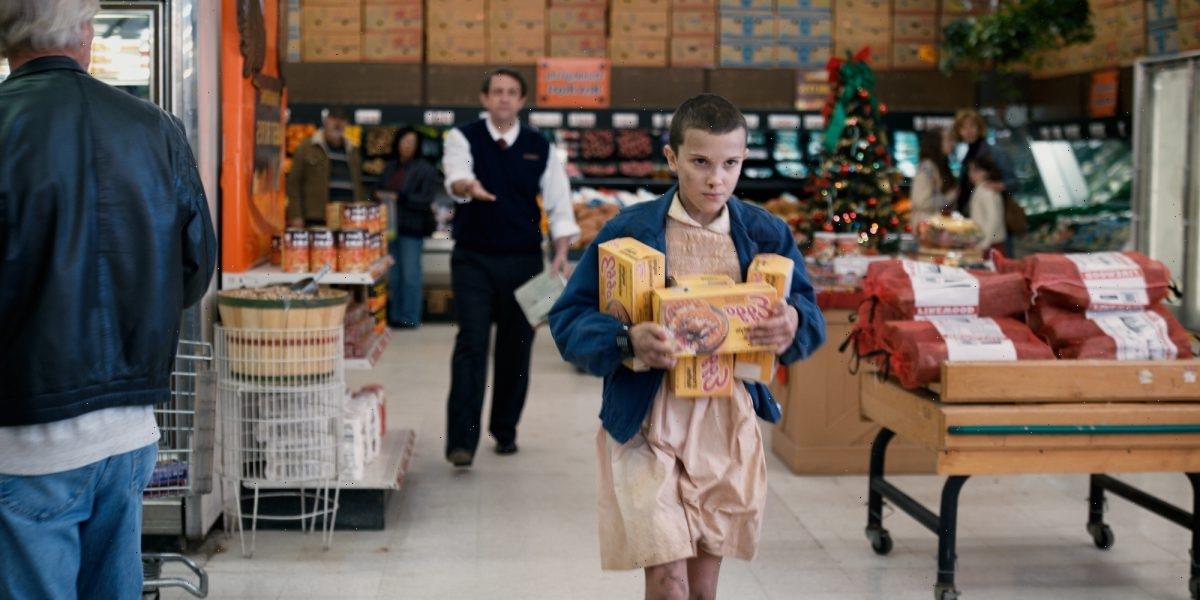 Stranger Things provides plenty of easy inspiration for Halloween costume ideas, especially the character of Eleven, played by Millie Bobby Brown. But before you tell us that Eleven’s been done before and nobody wants to dress up like her again, hear us out. We’re not just giving you one Eleven costume to choose from. No, we have options for you to choose from, including one from Stranger Things Season 4.

Stranger Things Season 1 is Eleven’s most iconic look, but it’s not all that hard to replicate. You’ll need a light pink dress, preferably one with a Peter Pan collar. Those dresses are actually somewhat back in style, so you can most likely find one on Amazon. You’ll also need some classic tube socks with the red and blue stripe at the top, as well as a navy jacket.

Eleven’s wearing a wig with this outfit, so you can easily work with a cheap one from your local Halloween store. (We’re sure a Halloween Spirit has taken over some abandoned building near you.) Some plain tennis shoes and a box of Eggos to top off your ensemble, and voila! You’re now Eleven from Stranger Things Season 1.

Bonus points: Eleven has a shaved head through all of season 1. You get bonus points if you actually shave your head for the costume.

In Stranger Things Season 2 Eleven begins to come into her own. She’s been stuck in Hopper’s cabin alone for a year, which is enough to make anyone stir crazy, so when she sneaks off on her own to find another one of Dr. Brenner’s subjects, she’s more than ready to find her own sense of style. That style happens to be a lot of black clothes, tight-rolled jeans, and black eyeliner smudged around her eyes. Use some hair gel to slick your hair back, and you’re ready to go as Eleven from Stranger Things Season 2.

By the time Stranger Things Season 3 rolls around, Eleven has ditched the black clothes, and with the help of Max (Sadie Sink), she embraces all the colors the ‘80s have to offer. Bright patterns were trendy in the ‘80s, so you could probably hit up your local consignment store to find something that works. Don’t focus on getting the exact patterns Eleven wears (although Target did offer the clothes at one point.) Instead, just go for clothes with lots of colors. Add some loose waves to your hair, and that’s all you need to have an Eleven costume idea from Stranger Things Season 3. It’s not a little obscure, and not everyone will know who you are, but does that really matter?

There’s not a lot of images out there of Eleven from Stranger Things Season 4, but what we have seen will make it easy to replicate. For this one, you’ll need a baggy plaid button-down shirt and some jeans. If you want to get really into character, you can always cut some bangs for your hair and have two guys in suits pretend to hold you back all night. It’s an easy way to pull off an Eleven costume idea from Stranger Things Season 4 Only the most dedicated fans of the series will know who you are, but that’s ok. Plus, if you’re a fan of plaid, you can always wear it again in your day-to-day life.

Stranger Things Season 4 premieres at some point in 2022. However, the first three seasons are currently streaming on Netflix.