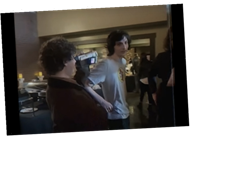 I mean, once you already reveal that the dead character isn’t dead, what more can you do to tease a show’s next season? As it turns out for “Stranger Things,” the Hawkins gang have reunited and by the looks of things, they couldn’t be happier. In a video posted to their official YouTube channel, the “Stranger Things” cast showed off glimpses of their first table read for Season 4.

The behind-the-scenes video clocks in at just under a minute and showcases all the stars, from Winona Ryder to a not-dead David Harbour as they share their excitement to sit down and learn more about this season’s secrets.

We don’t get any indication of what the actual scripts contain — no doubt someone will mine this video for any millisecond glimpse of a spoiler — but we do get to see the cast happy, hugging, and generally joyous to be in the same room together. It’s nice! We need more nice news!

This is the second teaser Netflix and series creators the Duffer Brothers have given us with regards to the new season. Back in July, the Duffers said they were excited to move beyond Hawkins, Indiana, and Russia has been a key plot point since the end of Season 3. (How meta.) “Assuming there’s a Season 4, obviously the question of who that American is in that cell and then also what [the Russians] are doing with the Demogorgon, is a tease,” says Ross Duffer.

Last month they shared the first teaser trailer which boldly stated that Harbour’s character Jim Hopper was alive and a prisoner in Russia. (Safe to say we know who the American in that Russian jail cell is.) But just how far will the Russian angle will go this season and what is their endgame with regards to the Demogorgan? The Duffers said in July they had the “broad strokes” of Season 4 already in mind and the video released today shows those strokes have transformed into serious plot details on the page.

Who know how many more teases they’ll include from here on out? The momentum is rising though — now we just have to wait patiently (or not so patiently) for a release date.

There’s no current release date for “Stranger Things” Season 4 but if things keep moving along we could see mid-2020 or early-2021.