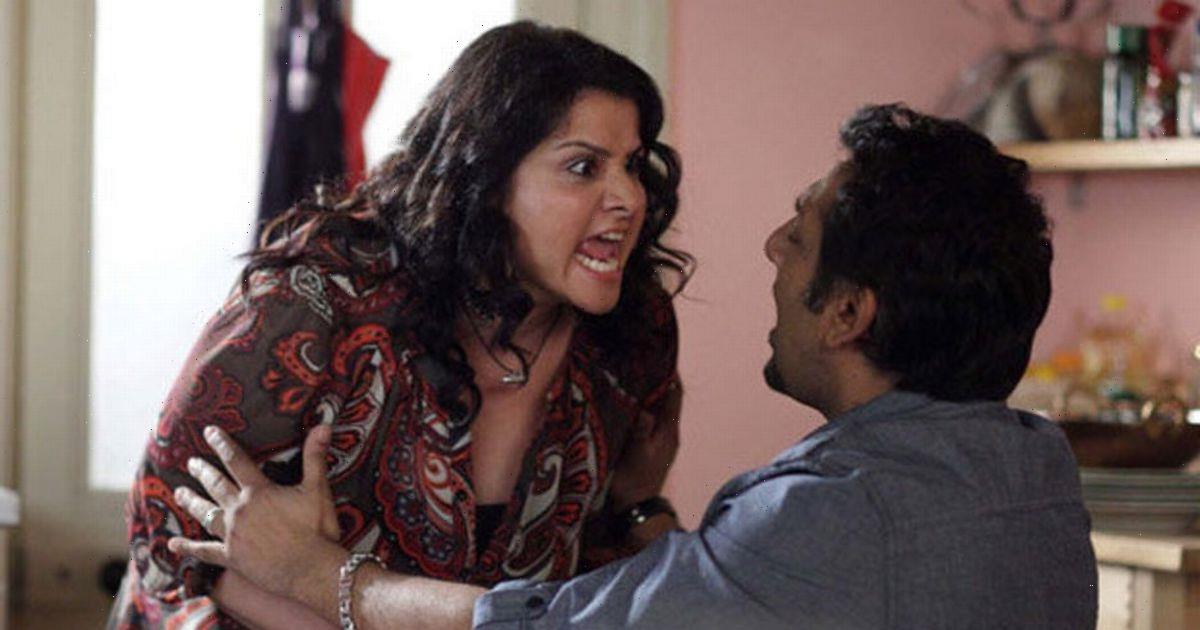 EastEnders' Nina Wadia has admitted she helped to create her soap character's wardrobe – and "hates" getting glammed up.

It doesn't bode well for her upcoming Strictly Come Dancing stint, as the show has long since been associated with glitz and glamour – and plenty of sequins.

She confessed that the process of getting 'Strictlified' is taking its toll on her.

Speaking to Daily Star Online and other publications, Nina admitted: "I hate it. I am very much a t-shirt and jeans girl.

"I do get dressed up for things I have to do, to make TV appearances or if the character I play in something demands it."

Nina continued: "For example when I played Zainab Masood in EastEnders, I was like, 'don't worry about hair and makeup, just make Zainab as plan as possible', because I don't like sitting in the makeup chair for too long, I don't like people pulling on my hair.

"And shiny things just scratch me and irritate me – so this is the best show for me to do, isn't it, really!" she quipped.

But Nina is particularly looking forward to one aspect of dressing up for the show – Halloween Week.

"I'd like to get to Freestyle Week, or Movie Week, I'd love that," she gushed. "Halloween might be fun as well, only because you get to really be a character.

"Hair and makeup and wardrobe asked me, 'When we dress you up for the show, are you going to be in character?' and I said yes!

"They said, 'Well then, can we take you to whatever that extreme is?', and I'm happy for them to do that. They're amazing."

She added: "Can I just tell you, no other makeup and hair team or wardrobe is ever going to compare to these guys. They're incredible."

Nina also paid tribute to some of her EastEnders co-stars, as she was asked which contestants particularly inspired her on the programme previously.

"I love Jake Wood. I thought he was brilliant. I love that he threw himself into it, same as Bill Bailey. I love people who, when they do it, they just do it and go for it, and it doesn't matter what they look like – and that's what I'm going to do," Nina confessed.

Some of her fellow soap star pals also gave Nina some advice before appearing on the show – including Coronation Street star Catherine Tyldesley.

She said: "I've had friends who have done it before, and they have all said it's the hardest thing you'll ever do, but you'll also love every minute of it.

"[Corrie's] Cath Tyldesley, [Casualty star] Sunetra Sarker – none of the EastEnders lot though! I know Emma [Barton] did it, and Scott Maslen was actually in [EastEnders] when he was doing it and he was exhausted. He just came in looking half his size."

The actress admitted she's looking forward to injecting some comedy into her routines – but plans to take the dance training seriously and learn some real skills on the dance floor.

"I do that with any job I do," she said. "That's just me – I will take it seriously. But I need to have the comedy there in order to get through it, because I can't take the glitz and glamour seriously.

"That side I can't take seriously. But what I can take seriously is the actual technical stuff. I genuinely want to learn how to do these dances."

Strictly Come Dancing returns to BBC One this weekend