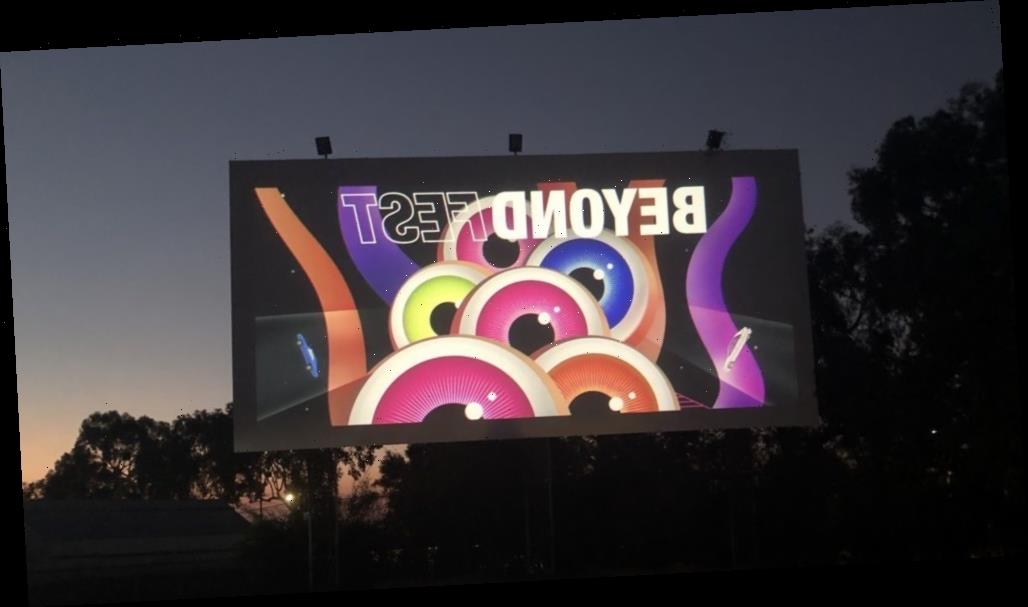 The idea of a U.S. film festival sticking to its dates in 2020 with a fully programmed, all-physical, non-virtual slate of screenings? It might seem beyond possibility, but then, the suspension of disbelief is particularly accentuated at L.A.’s annual Beyond Fest, which programs “genre” films every fall at the American Cinematheque’s Egyptian Theatre in Hollywood. With all indoor theaters in the county currently mothballed, the celebration of horror and fantasy moved to the most fantastical of SoCal places — Montclair — for a week of double-features at the Mission Tiki Drive-In, wrapping up with Thursday night’s riotously received world premiere of Blumhouse’s “Freaky.”

“If you had told us a year ago we were going to premiere at a drive-in, it might not have felt like an awesome thing,” said Adam Egypt Mortimer, the director of “Archenemy,” standing beneath the big screen and stars before the world bow of his film Wednesday night. “But that Beyond Fest figured out how to do this thing with all these people together is f—ing rad. The guys that do this festival have the most incredible weirdo curatorial eye, and it’s good to be out among people who love genre, because people who love genre really love film.

“I haven’t seen this many people at once in nine months, though,” Mortimer added. “It’s kind of freaking me out. Is Amy Coney Barrett here?” (The 100% mask compliance at the screenings — and the fact that Mortimer brought a newly purchased megaphone to conduct conversations at his premiere — would suggest the fest will only be a glee superspreader.)

Beyond Fest’s three programmers — Grant Moninger, Christian Parkes and Evrim Ersoy — got on a conference call shortly before Thursday night’s festival finale and still seemed slightly surprised that they pulled it off. That the festival dates and lineup weren’t announced until Sept. 18 (less than a week before they held a pre-festival kickoff event with the premiere of “Possessor Uncut”) testified to a lot of loose ends being tied up at the last minute to make it all come together.

Some other festivals this year have had a mixture of online programming with a few outdoor screenings mixed in; they believe they’re the first entirely in-the-cinematic-flesh fest to happen since pre-pandemic Sundance.

“It was really important for us to do that,” says Ersoy. “We had an opportunity to produce Beyond Fest as virtual. But one of our core tenants and founding principles is to bring people together. It’s always been about celebrating the theatrical experience in the communal environment, and that’s just not something you can do at home in isolation. But to be honest, we were hesitant. The (partnering) American Cinematheque came to us and said, ‘What do you think about doing it at the drive-in?’ We had reservations over, in part, concerns about the technical components of what the Cinematheque is known for, so we didn’t want to do anything to downgrade the experience for filmmakers and for fans. But somehow everything fit together. Film editors, sound designers and crew members are reaching out to say how great it was to drive up and see the crowds react, and to hear them honk their homes.”

Although there have been attempts at doing live Zoom Q&As projected onto the big screen at a few other drive-in premieres this year, those haven’t always gone flawlessly, so Beyond Fest opted to have filmmakers and cast members film introductions for their movies. But a more personal touch was in evidence in some of these. In the pre-recorded intro to “Archenemy” Wednesday night, the director, Mortimer, said he would respond to tweets during the screening from his car, and then actually put his cell phone number on screen for any attendees wanting to more personally check in with questions.

“Adam’s a very brave man,” laughs Ersoy. “He apparently got a hundred calls and messages and responded to all of them.”

Says Moninger, “I just want to say that it was on the Cinematheque budget all year long. We never took it off, because the people wanted it, the filmmakers wanted it, Beyond Fest wanted it and we wanted it — but we didn’t know how it was going to happen, where it was going to happen or what it would be, in a year where at some points you have no theaters and no films being released. We really didn’t have any budget to do this because it had to come together so quickly. It’s amazing that it even happened, to put up an entire festival of films that we were all very proud of and excited to get, at a theater that is a real drive-in — like, has been a drive-in for decades and decades” (as opposed to a pop-up). “Without the support that the Mission Tiki gave us, this would never have happened. They really did us a solid. No one’s getting rich off this — the Mission Tiki didn’t milk us and we didn’t milk any of the audience. We tried to keep tickets as low as possible, knowing this is a tough year for everybody.”

Adds Parkes, “The shifting landscape from a studio standpoint really impacted us, because obviously there were studio films that were dated. So from a program standpoint, it was pretty late in the day that we were able to actually lock down the date, which put even more pressure on us to pull together something so quickly with a tight window that was actually afforded to us. But we all just want to get back to watching movies again, so there was a real desire to pull off from Universal, Blumhouse, Neon, A24, RLJ, all the way down.”

For some filmmakers, the drive-in experience was more personal than others. “Jim Cummings, the director of ‘The Wolf of Snow Hollow,’ actually goes to the Mission Tiki, and he saw Pixar’s ‘Inside Out’ there, which he says is his favorite film. So he said that to have ‘Wolf of Snow Hollow’ play there meant a lot to him.”

This might not be a solution that will work for other film festivals. Would the patrons of the tony New York Film Festival rent cars to drive to the nearest drive-in in upstart New York to see European art films? Moninger says that shouldn’t be so much of a stretch as it sounds, philosophically, if not geographically. “Roger Corman produced Bergman films,” he points out. But, notes Parkes, “I’ll say this. There are definitely films that warrant the honking of horns more than others. And I’d like to think that we program those.”

“And,” says Moninger, “certain films… like, I would say ‘PG Goreman’ played so well, and it was a huge hit Wednesday night and a great marriage between the film and the drive-in experience.” The film, which combines juvenile leads with a mean-spirited alien for something akin to a R-rated “Goonies,” “blew the roof off the place,” even though he’s quick to add, obligatorily, that “there’s no roof at a drive-in.”

By the time festival season rolls around next fall, everyone’s hoping theaters, including the Egyptian, will be back open in full. The Mission Tiki may not be, since the land has long since been sold for a long-delayed redevelopment that is considered likely to kick in in 2021, which will be sadly ironic after the mid-century-dating four-screener has finally been discovered by all of adjacent L.A. County after counting as a secret for so long.

Says Parkes: “I think the key statement is that as long as there’s an opportunity for us to screen films with filmmakers that we love, to fans that will appreciate it, we’ll be screening films, whether that’s at a theater, at a drive-in, or totally guerrilla-style in someone’s backyard — we’ll figure out a way to do it. As long as there’s a screen, we will project onto it.”

Prior to the “Archenemy” premiere Wednesday night, Mortimer and his co-producer and leading man, Joe Manganiello, were riffing on the different strains of genre filmmaking that come together in their movie, which is a grittier and literally punchier variation on a “man who fell to earth” theme.

Manganiello said that he and the director drew from a similar dip into “the cauldron of independent comic books that people read during the ’80s and ’90s — putting our heads together on subject material that generally is only handled by studios.”

“This is not a horror movie,” emphasized Mortimer, setting it apart from some of the festival’s other fare. “It’s like a f—ing science-fiction crime superhero psychedelic breakup action meditation on violence. … One of the many ways that we sort of thought about this was the idea of like, if Doctor Strange, who is the most cosmic of superheroes, lost his superpowers, he would become the Punisher.”

“It’s good to be among people that love good, weird movies,” said the actor, surveying the scene of masked attendees, loosely congregated before the movie. “It feels like we’re in high school, somewhere we shouldn’t be. This feels the kickoff for a horror movie. This is how it starts.”

“It’s like the pep rally has just ended,” said Mortimer, “and we’re going to walk into the corn maze.”

“For sure. You’ve got the megaphone,” said Manganiello. “We’re here to ruin the pep rally. I got kicked off the football team. And now we’re going to get our revenge, but then s— happens.”

“Then the demon comes,” agreed the director, inspired. “Yeah, we should work on that.”