Consider This: Conversations highlight television’s award-worthy productions through panel discussions with the artists themselves. The above video is in partnership with Amazon Prime Video, produced by IndieWire’s Creative Producer Leonardo Adrian Garcia, and hosted by TV Deputy Editor and Critic Ben Travers.

One of the innate challenges to making “The Boys” — Amazon Prime Video’s superhero satire — is making the impossible feel real.

“You try to find that grain of reality in everything, and that can be very hard to do,” VFX Supervisor Stephan Fleet said in a panel discussion with IndieWire. “You could have a sentence that’s like, ‘We want the Boys to crash into this whale, but it needs to look as real as possible’ — or, ‘We want this giant dick monster to wrap around Mother’s Milk’s neck, but it has to feel real.”

The combination of absurdity and authenticity is exactly what helps the two-season-old series keep its edge. Developed by Eric Kripke and based on the comic books by Garth Ennis and Darick Robertson, “The Boys” follows a group of vigilantes who seek to expose superheroes who’ve abused their powers. These average, powerless men and women have to believably co-exist in a world where people who look just like them can fly, shoot lasers out of their eyes, and run at superhuman speeds.

“In this day and age, there’s a tendency to lean on visual effects very heavily because it’s quicker in production, but we don’t do that,” Fleet said. “We go the other way on this show. We always start with the most practical way we can do it.”

And because “The Boys” is a dark satire, that means the out-of-control supes often commit very grisly crimes.

“We do use real blood,” Fleet said. “We’ve created all kinds of crazy rigs to shoot blood everywhere, and then the visual effects will enhance as necessary.”

One such rig was necessary for a scene in Episode 1, when, out of the blue, a character’s head just… explodes.

“We shot her on a green screen. We shot a dummy that dropped to the ground without a head. We had a blood rig that we call The Blood Lollipop — you stick it out there and it blows up at 360 degrees. What that really did was it hit the other guys with a bunch of blood, which is really great,” Fleet said. “Then you put all that together in post, and then you add CG stuff on top of that — we did a scan of her head and built a CG model, a CG skull, muscles, eyeballs — and then you kind of play with it. You take all those ingredients and dial them up or down; more mist or less mist, more meat, or bigger chunks, or more velocity.”

All that work would be par for the course on “The Boys,” where gruesome deaths are part of the daily grind, except that this whole “spontaneous exploding heads” thing becomes an even more prominent part of the later season. A later scene has not one, not two, but many actors requiring an assist from Blood Lollipop. To make it all feel as lived in as possible, Supervising Sound Editor — and Emmy nominee for Season 1 — Wade Barnett stepped in.

“When you start working on the sound design for superheroes and powers that are out of this world, it can start to sound digital or synthesized,” Barnett said. “But when we first met with Eric, he said he wanted the sounds to sound organic, [so we] can really tell they’re coming from the body.”

So for the head explosions, the sound team utilized a variety of real sounds, from “bone crunches and tree branch snaps” to “a lot of fruit ripping and squishing, and meat tearing.”

On set, those scenes require careful coordination to help orchestrate intense action — the shock and awe effect, if you will.

“One of the most interesting things about creating action for the show is the intersectionality of practical stunts with SPFX and VFX,” Stunt Coordinator Tig Fong said. “Sometimes you’ll have people interacting with those exploding heads. Sometimes you’ll have people falling and running. That creates more visual chaos that we’ll want to orchestrate to help up the ante, if you will.”

But the exploding heads aren’t even close to the most challenging work done by the stunt team, which was nominated for a SAG Award early this year. The aforementioned whale scene earned early headlines — among many challenges, it required the construction of a whale for Chace Crawford to ride, while Karl Urban actually drove the boat-turned-harpoon himself at times — and there’s a fight scene that starts outside, moves inside, and then features a huge jump from rooftop to rooftop that was all orchestrated by the stunt team. 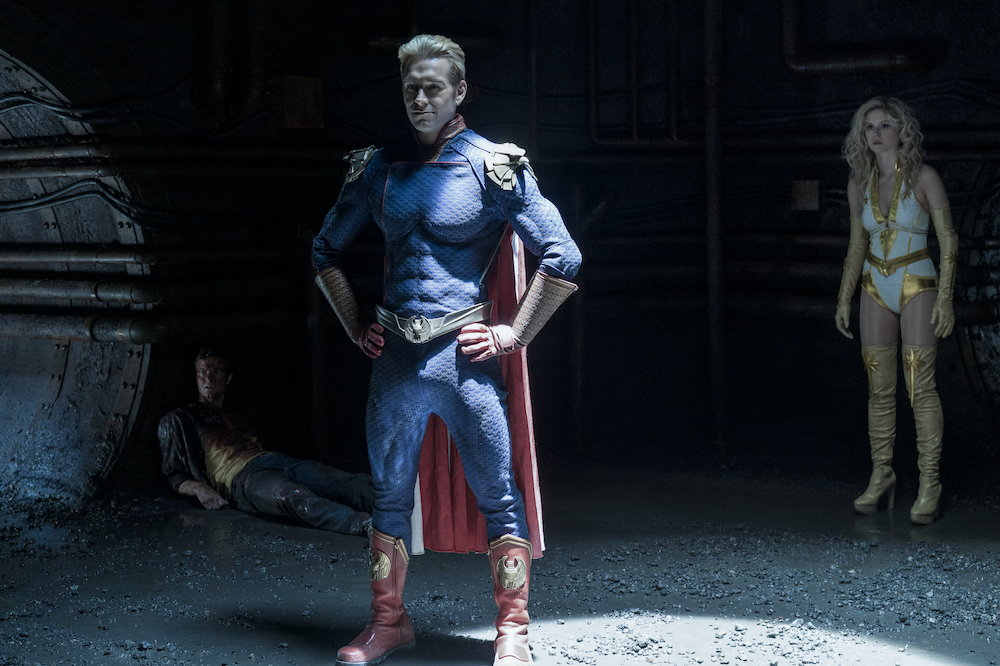 Antony Starr in “The Boys”

All of these practical effects only make things messier, which makes Laura Jean Shannon’s job as the Supersuit Designer that much harder.

“It is tricky cleaning those suits,” she said. “Sometimes we can do it, and sometimes they go into that soft retirement, which really just means, later, they get even more f’d up.”

Speaking of, Composer Christopher Lennertz is about as far removed as you can get from the image of a classical musician delicately conducting a tuxedoed group of players. It’s not that his score for “The Boys” isn’t meticulous and stirring; it’s just that the instruments he relies on aren’t exactly what you imagine.

“I started giving them gritty music, but [music that was] still played in a good studio by really amazing musicians, and I sort of hit a brick wall with Eric [in Season 1],” Lennertz said. “He was like, ‘Yeah, it’s kind of right, but it’s not really right — it’s too good.’ So then we started making it a little messier, and [he said,] ‘It’s better, but it’s still too good, and it’s still too clean, and it doesn’t represent the kind of super-violent, bare bones nature’ [of ‘The Boys.’]”

“Me and my team, we went shopping. We said, ‘Show us all your broken amps. I want to see all your broken guitars. I don’t want to see anything that works the way it’s supposed to — if it doesn’t make weird noise, if it’s pristine, we don’t want it.’ Then we went to pawn shops and junkyards and we did the same kind of thing,” he said.

From there, they started using found objects — like scraping cheese graters or dropping bags of silverware onto the floor — to mix into the score. That’s the sound Kripke was looking for, and the one that ended up driving “The Boys” into Season 3.

Coming up with a score using kitchen utensils is about as real as it gets, and if you would’ve asked Lennertz to guess the solution to his composition challenge, well, he probably would’ve said it’s impossible. Welcome to “The Boys,” where the real and impossible come together.

“The Boys” Season 2 is available to stream via Amazon Prime Video.