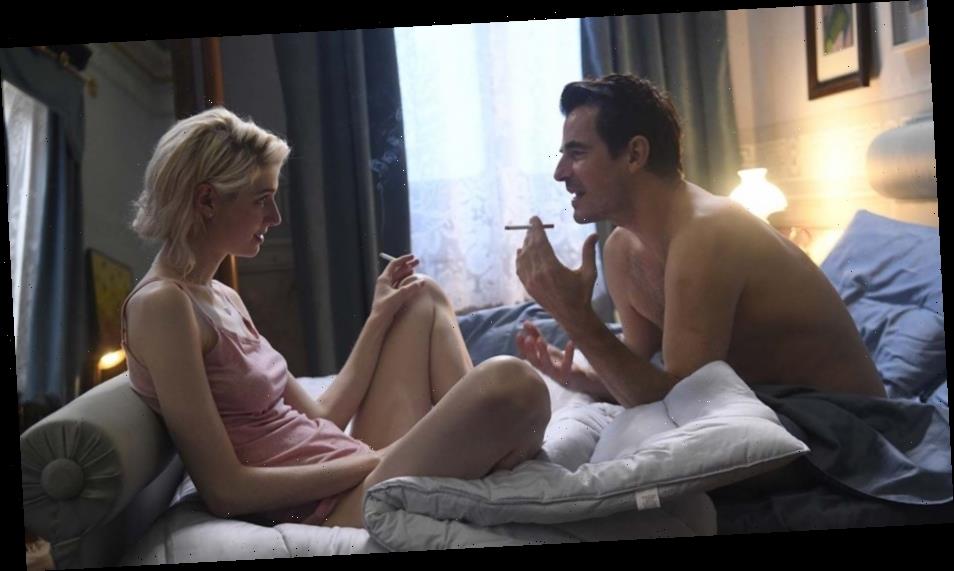 A slinky but inert Euro-thriller that splits the difference between Abbas Kiarostami and François Ozon in a futile effort to forge both of their talents, Giuseppe Capotondi’s “The Burnt Orange Heresy” is a movie about the value of art that offers little in the way of artistic value. What it does have — in spades — is Elizabeth Debicki swanning around the well-monied banks of Lake Como as a mysterious connoisseur whose sultry exterior may (or may not!) hide another meaning under its surface.

Beguiling even as the silly film around her struggles to square high-brow gloss with low-rent delight, the bird-like “Widows” actress manages to soar above the rest of the action without insisting the material is far beneath her; Mick Jagger’s cameo as a devious art dealer could only dream of painting such a distinct impression. “Never let a thing’s worth obscure its value,” someone cautions early on, but Debicki takes pleasure in denying us that chance. Whether playing a gold alien space queen or a simple girl from Duluth who gets swept up in the modern art world’s most ludicrous scandal, her performances are virtually always priceless.

Playing a willowy Ingrid Bergman type with the poise of a femme fatale, Debicki stars as the beautifully named Berenice Hollis, a flirtatious American who wanders into a Milanese art lecture with more interest in the suave man at the podium than any of the paintings behind him. His name is James Figueras (“The Square” actor Claes Bang, cementing his status as the middle-aged Noah Centineo of the “Velvet Buzzsaw” crowd), and he’s busy dazzling tourists with the CliffsNotes of the monologue that opened “Certified Copy.” Dazzling the crowd with the context behind an impressionistic portrait that an old master supposedly left behind as a suicide note, James reveals that he made it all up — that he splotched together the piece himself in order to prove that art is only as valuable as the importance we confer upon it. Finally, a sexy film about the powerful role that (hot) critics play in shaping people’s experience of the world!

…Or not. James is soon revealed to be a failed painter who only became a pill-popping critic after someone told him that he was better at talking about art than making it. Ironically subscribing to an inflexible social hierarchy that prizes some creative types more than others, James mistook that comment as his cross to bear, and has been raging against it ever since. Of course, the comparatively enlightened Berenice (“I’ve reached a point in my life where I appreciate the value of free things”) doesn’t know that when she hops into bed with him a few hours later.

Not even Capotondi’s lax and uncertain direction can disguise the fact that these two are a dangerous combination. She believes that art is a window to the truth, he’s compelled by its power to obscure it, and the tension between those conflicting philosophies will leave someone dead when the new lovers abscond to the Italian countryside for a weekend of violent appraisal.

Based on Charles Willeford’s novel of the same name, “The Burnt Orange Heresy” quickly self-immolates from there, as its story unfolds with the sketchiness of a figure-drawing class. Jagger’s ascot-wearing Bond villain of a collector reveals that a long-silent legend of the art world is secretly living on his estate, and he offers James a career-making interview with the reclusive genius (Donald Sutherland drifts through as Jerome Debney, and the actor’s iconic gravitas helps sell a convoluted premise that never makes enough sense). In exchange, the collector wants James to secure a new piece from the master painter, which would be automatically priceless on account of the fact that Jerome has repeatedly set fire to his previous work. Only Berenice is able to see the creative spark beneath that destruction.

Paint-by-numbers discussions about the nature of artistic truth eventually bleed into frantic bursts of attempted murder, but the brushstrokes are far too clumsy for that transition to feel unforced. Melting “The Burnt Orange Heresy” into the kind of tasteful erotic thriller that confuses an artfully hidden penis for subtext, the middle sections of this movie draw from a dull palette of uninspired dialogue scenes (most of which seem determined to waste their gorgeous backdrops) and the frustrated sexual tension of a movie that manages to burn everyone in it without ever being hot. Capotondi is never able to distill anything seductive from the intellectual curiosity of Scott Smith’s screenplay, and the tonal mismatch forces these characters to constantly reveal themselves until the only mystery left beneath their respective masks is why anyone should care.

“Most things — most people — are not what you expect,” Jerome declares, but “The Burnt Orange Heresy” is seldom anything else. Borrowing from a dozen better movies as it tries to blur the line between a forgery and a masterpiece, Capotondi’s film manages to undercut its thesis with each new stroke. Only Debicki, who empowers Berenice with a cunningly honest sense of self-belief, is able to intuit what this story needs from her at every step. She’s a true original in a world full of convincing fakes, and it’s never been more difficult to put a price on that.