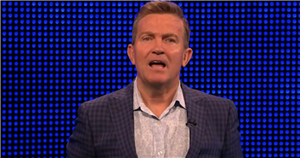 The Chase viewers were left scratching their heads on Tuesday afternoon as contestant Mia made an hilarious blunder on the ITV quiz show.

Host Bradley Walsh welcomed four new contestants to the studio and was eager to see them get through to the final with some money in-hand.

Mark Labbett aka The Beast was in the hot seat trying to prevent the hopefuls from going home with the cash prize.

Dinitri, Steve, Liz and Mia all took it in turns to take on the cash builder and later went head-to-head with The Beast in an intense round of general knowledge questions.

Mia was the first player to try their luck again the quiz champion.

Things didn't go quite to plan for the contestant during the cash builder round as she stumbled on a question about the Royal Family.

Mia confidently replied: "Prince Charles", however the correct answer was in fact his mother, the Queen.

Another added: "Prince Charles?" alongside a series of laughing face emojis.

A third person posted: "Prince Charles? What have we missed?"

The Royal Family all have cute nicknames for each other, with many of them calling the Queen "Lilibet".

Prince George, however, called the Queen "Gan-Gan" when he was younger, while his mum Kate Middleton and Duchess of Sussex Meghan Markle reportedly called her "Mama".

Mia was unfortunately caught by The Beast during her head-to-head round and was sent packing.

Liz and Steve managed to make it through to the final chase and beat Mark.

Fans congratulated Steve and Liz on their big win with one fan tweeting: "Great win for the team."

Another added: "Glad for them, they deserved it, and put more or less their winning amounts into the pot, very fair.."

While a third person posted: "The Beast not had his Weetabix today or what hahahah he’s had a stinker."

"A great performance from Liz and Steve, setting 19 steps for the Beast, who wasn't on form today. The team executed 2/6 pushback opportunities, which was just enough to secure the victory. Well played!," a fourth viewer wrote.

The Chase airs weekdays on ITV at 5pm