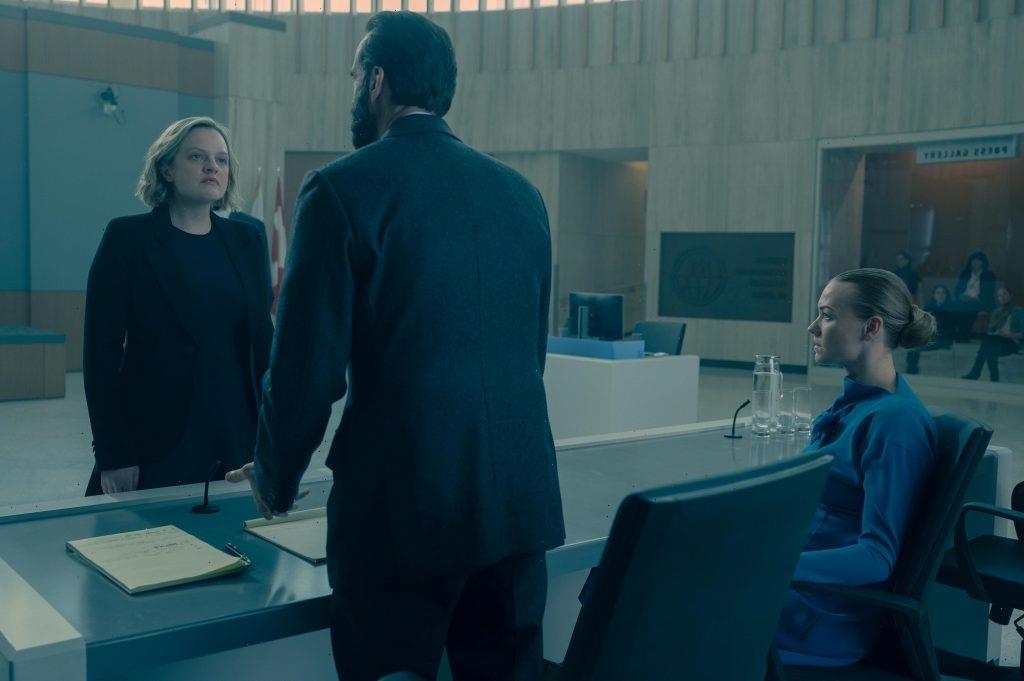 Season 4 episode 8 of The Handmaid’s Tale, aptly titled “Testimony,” premiered on Hulu on June 2. In the moment we have all been waiting for, June Osborne (Elisabeth Moss) gets the chance to testify against Commander Fred Waterford (Joseph Fiennes) and Serena Joy Waterford (Yvonne Strahovski). The episode also displays how much June has changed, causing problems with her husband, Luke Bankole (O-T Fagbenle), and her best friend, Moira Strand (Samira Wiley).

[Spoiler Alert: This article contains spoilers for season 4 episode 8 of The Handmaid’s Tale.]

After a brief scene where she cuts her hair, “Testimony” begins with June attending a group therapy session for women who escaped Gilead. Moira is the support group’s leader, which raises the question: why?

Moira is not a professional psychologist or trauma counselor, she has her own trauma from Gilead, and she is personal friends with two members of the group. It would make perfect sense for her to be a founding member, but she does not seem like the most qualified person to lead the therapy sessions.

Regardless, June cannot relate to the other members because she feels more outward anger toward Gilead compared to them. She doesn’t understand the other women’s paths of healing and forgiveness. As she discusses this with Moira, a woman they have never met before attempts to speak with Emily Malek (Alexis Bledel), who refuses to have anything to do with her.

At dinner that night with Emily, Moira, and Luke, June encourages Emily to disclose the mystery woman’s identity. Emily reveals that her name is Aunt Irene, and Emily knew her from her first posting as a Handmaid in another district. Despite June’s encouragement, Emily refuses to confront her.

After dinner, Luke and June awkwardly wash dishes together as Luke attempts to emotionally connect with his wife. He asks if she wants him to attend her testimony against Serena and Fred, but she tells him she does not want him there. Luke vents to Moira that June is like a stranger to him, a comment that June overhears as she stands outside the kitchen.

June gives a powerful testimony, but is it enough?

Despite June’s wishes that Luke not watch her testimony, he shows up anyway with Mark Tuello (Sam Jaeger), determined to hear about what June went through in Gilead. June recaps the first three seasons of The Handmaid’s Tale in her testimony, detailing the trauma she endured at the hands of Fred and Serena.

When she finishes, the Waterfords’ defense attorney asks her questions in an attempt to victim blame her. To the prosecution’s objections, Fred then speaks out of turn and declares that he helped June on multiple instances. He also claims that Gilead’s system works, as it is the only country where the birth rate is rising.

At this, June approaches him and exclaims, “I am done!”

She leaves the courtroom, and despite the crimes she exposed in her testimony, Fred’s outburst earned the Waterfords newfound fans in Canada. As he and Serena leave their holding cells for another day in court, they are greeted by a group of supporters.

Janine is alive in ‘The Handmaid’s Tale’

Back in Gilead, Commander Joseph Lawrence (Bradley Whitford) chastises Aunt Lydia (Ann Dowd) for lashing out at Handmaids. He then lets her know that Janine (Madeline Brewer) was captured in Chicago, giving Aunt Lydia the chance to either torture Janine or change her ways.

Aunt Lydia goes to a resigned Janine who begs not to become a Handmaid again. With tears in her eyes, Aunt Lydia hugs Janine and says, “Whatever are we going to do with you?”

Given that The Handmaid’s Tale may begin to align with Margaret Atwood’s sequel The Testaments, it seems Janine might be the key to Aunt Lydia’s redemption.

Back in Canada, June channels Aunt Lydia and brings Aunt Irene back to the support group for Emily to face her. At the next group therapy meeting, June encourages the other women to give in to their anger despite Moira’s protests.

“Testimony” displays just how much June has changed. Yes, she is a trauma victim, but she also has no interest in healing or returning to her old self, unlike Luke and Moira. It is not just that June has trouble acclimating to Canada, a large part of her does not want to acclimate, because it would mean leaving her desire for revenge behind.

The episode ends on a promising note, as June opens up to Luke and agrees to tell him about the last time she saw their daughter Hannah (Jordana Blake).

New episodes of The Handmaid’s Tale premiere every Wednesday on Hulu.