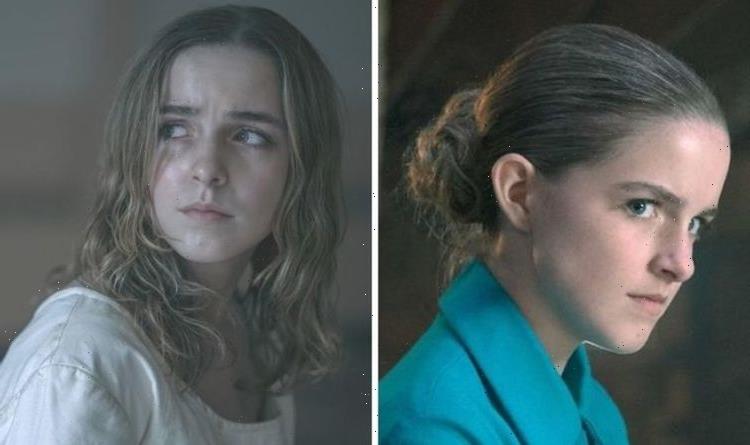 Hulu’s dystopian series The Handmaid’s Tale aired the explosive finale in June which left fans concerned about the fate of June Osborne (played by Elisabeth Moss). As fans wait to see what happens next, Esther Keyes star McKenna Grace opened up about portraying a 12-year-old wife and detailed its importance.

Speaking to Deadline in a conversation with the cast and showrunners, McKenna Grace who played stern Esther Keyes, revealed: “Going into this I really wanted to make sure I played Mrs Keyes right.”

The Handmaid’s Tale is set in the patriarchal society of Gilead, where women were completely stripped from their rights.

While infertile women became wives to Commanders or Guardians, it was the role of the Handmaid’s to bear children for the family.

Although wives were the most privileged women, they still had no rights, this was the same for McKenna’s character Esther Keyes.

She was introduced to viewers in season four as her home was a safe space for June Osborne and the other Handmaids on the run.

While the women were able to take a brief break from running and plan their next move, viewers learnt Esther was married to Commander Keyes (Bill MacDonald), a man old enough to be her grandfather.

During a conversation with June, Esther confessed to using Nightshade on her husband and slowly poisoning him for raping her and inviting other men to do the same.

The actress explained: “I felt that it was important that they had someone who was actually Mrs Keyes’ age, I definitely researched and I watched a lot of interviews with women who have been through trauma Mrs Keyes has gone through.”

McKenna highlighted: “I know that everybody’s trauma is different, I just wanted to make sure I accurately portrayed what Mrs Keyes was going through.”

Towards the end of the season, it was revealed Esther Keyes had been caught hiding Handmaid’s and was sent to the Red Center to become one.

While June was eventually able to gain freedom in Canada, Esther was coming to terms with losing hers.

She initially put up a fight and was rebelling against evil authoritarian Aunt Lydia (Ann Dowd), but was spoken out of it by fellow ex-escapee Janine Lindo (Madeline Brewer).

In season one, fans watched the horrible scene as rebelling resulted in Janine having her eye taken out as punishment.

McKenna opened up about Esther’s fate in season five and revealed she didn’t know where her character was headed.

“I have no idea where Mrs Keyes is going to end up, I have my fingers crossed that she’ll be able to do cool things.

“But I have no idea where she’s going, I feel like she could go in a million different directions,” the actress concluded.

Thankfully for fans season five was confirmed, express.co.uk will be updated with release information.

The Handmaid’s Tale season five is expected to premiere in 2022.