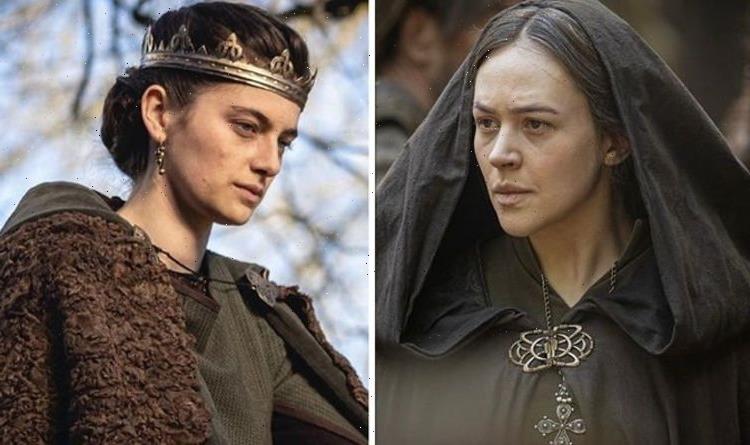 The Last Kingdom season five will air on Netflix in the near future and fans were sad to hear it would be the final season. The historical drama is based on The Saxon Stories by Bernard Cornwell and the final outing will wrap up Uhtred of Bebbanburg’s (played by Alexander Dreymon) story. In season four he ended his relationship with Aethelflaed (Millie Brady) and viewers are worried the Lady of Mercia may die.

Will Aelswith outlive Aethelflaed in The Last Kingdom?

The Last Kingdom fans were disappointed when Uhtred and Aethelflaed cut all romantic ties in the fourth season.

Aethelflaed did not want to jeopardise her position as ruler of Mercia and so vowed to “remain chaste” and avoid any relationships.

Towards the end of the season, Uhtred helped Aethelflaed and her brother Edward (Timothy Innes) save Winchester following the Danish siege.

Aethelflaed’s mother Aelswith (Eliza Butterworth) was being held captive along with other members of their family.

In the season finale, she was poisoned by Lord Aethelhelm (Adrian Schiller) and her ultimate fate was unknown.

Now, in a promotional photo for the final season, Aelswith has been seen alive, meaning she overcame her ordeal.

However, in the photo, she is wearing a black cloak and bears a sad expression.

Fans have taken to the platform Reddit to suggest Aelswith will outlive her daughter in a heartbreaking twist.

One said: “Seems like Aelswith will outlive her daughter and I find it weird, nothing against Eliza, but it seemed like her story was finished in s4.” [Sic]

Expanding on their theory, they added: “I’m pretty sure she’ll be the reason why Aelswith and her granddaughter are dressed in black in this bts photo.” [Sic]

They proceeded to share a link to the show’s Instagram page, which features the photo of Aelswith looking troubled.

They praised the hair and makeup department for showing Aelswith’s age, which has been spurred on by the loss of her husband Alfred (David Dawson).

One fan commented: “I sincerely hope that Aelswith will stay alive #wewanttlkseason6.”

The series is inspired by real-life historical figures, and the real Ealhswith died in December 902.

Her daughter Aethelflaed died in June 918 – 16 years after her mother.

With this in mind, if the series goes by historical accuracy, Aethelflaed will outlive her mother.

As the series is coming to an end with season five, both characters may meet their demise before the finale.

The final outing will see a huge time jump as Aelswith’s grandson Aethelstan (Harry Gilby) has grown up.

He is next in line to the Wessex throne and may become king before the series comes to an end.

The season five premiere is likely to include flashbacks revealing how Aelswith was able to survive the poisoning.

She will then make it her mission to take down Aethelhelm and make sure her grandson takes his rightful place on the throne, succeeding his father Edward.

Aethelflaed’s attention is likely to be focussed on Mercia now that the Danes have moved on from Winchester.

It is likely a lot of time has passed since she last saw Uhtred and fans will be interested to see if their feelings for each other are reignited.

The Last Kingdom seasons 1-4 are on Netflix now.