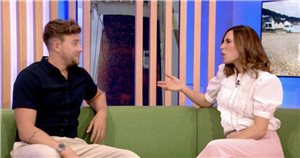 BBC star Alex Jones wasn't tolerating any nonsense on The One Show on Friday night, that's for sure.

The 45-year-old was joined by English radio host Roman Kemp who took up the hosting role with her on the green sofa.

Things turned sour when the pair were discussing the FA Cup celebrating a landmark birthday when Roman made a rude gesture but hilarious about her co-host Jermaine Jenas.

Roman was stopped in his tracks and shut down quickly by Alex who warned him he'd "be gone" if her carried on.

Updating on the segment, Roman explained: "Now this weekend at Wembley, one famous trophy is celebrating a very big birthday and at a moment we’ll be live at the stadium to see how preparations are going for the FA Cup final."

Alex added: "Now unfortunately our Jermaine never won it himself."

At which point, football loving and Arsenal fan Roman made a celebratory fist as he chimed: "Yesss," so that Alex could hear.

After realising what Capital FM presenter had said she lunged to the defence of her co-star Jermaine and warned him he'd be off the show.

Pointing at him, she said: "Stop it, you’ll be gone after that."

This is a live TV story and is being constantly updated. Please refresh the page regularly for the latest news, pictures and video.

You can also get email updates on the day’s biggest TV stories straight to your inbox by signing up for our soaps and Hot TV newsletters .

Get all the very best news, pictures, opinion and video on your favourite TV shows by following Daily Star every time you see our name.

Keep up-to-date with your must-see TV stories, features, videos and pictures throughout the day by following us on Facebook at facebook.com/DailyStarShowbiz