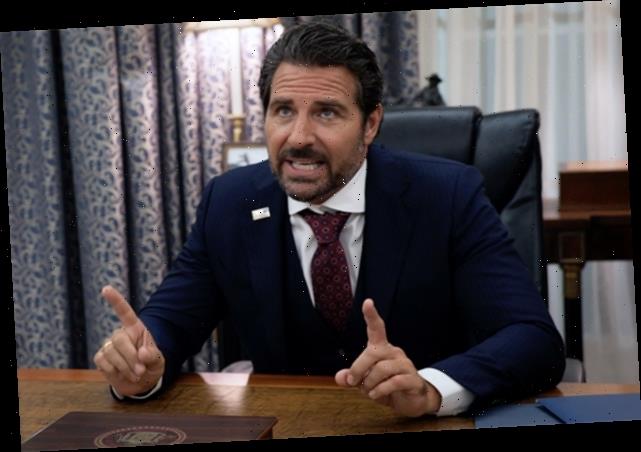 Hunter Franklin is not the kind of man you’d celebrate on Presidents Day. That much has been clear since the 2019 series premiere of Tyler Perry’s The Oval, which opened with a knock-down, drag-out fistfight between President Franklin (played by Ed Quinn) and First Lady Victoria (Kron Moore).

“I really thought that scene would get toned down, but we actually had to reshoot it because it apparently didn’t go far enough,” Quinn tells TVLine. “I was very nervous about shooting that scene, and then I was also very nervous for it to air. But sure enough, Tyler’s audience was just like, ‘Oh, we’re doing this? OK!’ It really set the tone and showed exactly what the show is — crazy, over-the-top escapism. I really have to hand it to Tyler. He rarely reshoots stuff, but he wanted to get that pilot right.”

This outlandish behavior continued throughout the BET drama’s first season, which included a particularly risqué sex scene. “After his fight with the First Lady, that love scene in the Oval is the one everybody talks about,” Quinn acknowledges. “And it’s another one that Tyler spent extra time shooting.”

Speaking of shooting, not only was The Oval among the first shows to return to production amid the coronavirus pandemic — alongside Perry’s Sistas — but it was also one of the first to film an entire season in quarantine. (Season 2 premieres Tuesday, Feb. 16 at 10:30/9:30c.) And it was no easy feat, as Quinn explains:

“There was a historic district at Fort McPherson, which is the old Army Base that Tyler turned into Tyler Perry Studios, and it’s full of these beautiful old homes. I had lived there already by myself in Season 1. So when we got shut down the day before we were supposed to start production on Season 2, and Tyler was trying to figure out how we could go back, he was actually looking at me. Like, ‘If Ed could do it, why can’t we all do it?’ So Tyler built about 100 luxury mobile homes [for employees], and all of the actors lived in the historic houses. We started testing about a month before production started, then had this whole protocol — testing, flying private, landing, testing, quarantining — before we could get into the bubble. It was kind of like adult summer camp. Everybody was there and we could sort of tune out the rest of the world. We had food trucks and music and movie nights. 330 people stayed safe, with no positive tests, and we filmed an entire season of TV under quarantine. We were only there for three weeks, because the show shoots really fast, but I had so many directors and showrunners and other people DM-ing me asking how we were doing it.”

So, how could The Oval‘s second season possibly top its first? For starters, Quinn warns, “It’s a very, very dark season.” Even though Hunter is given plenty of opportunities for comic relief, the word “dark” keeps coming up. “Horror show darkness,” to be precise. “It’s everything The Oval has always been — sensationalist, over the top and nutty. I can’t wait for it to premiere.

Hit PLAY on The Oval‘s Season 2 trailer below, then drop a comment with your thoughts.